The first ever UK appearance by the Meat Puppets finally gave me a glimpse at just who exactly it is that's been keeping the faith for so long. It's a motely, peculiar congregation assembled tonight--skatepunks in baseball caps; snakebite-quaffing tradpunks; cardigan-and-one-earring herbivore anarchists like the nice, caring bloke in EastEnders; bearded, more-or-less unreconstructed hippies; bespectacled nerds of the Albini/Santiago stripe; REM drummer lookalikes. And rock critics, of course. This heterogeneity reflects the schizo-eclectic nature of Meat Puppets music, suggests that each strand of their following trips on a different facet of the group--the acceleration; the virtuosity; the desolation and vulnerability; the free noise wig-out.

Over seven years and five albums, the Meat Puppets have created for themselves four distinct sounds, each one a perfect amalgam of country, free jazz, funk and acid rock, an alloy rather than a cocktail. Each of these sounds has been completely new, completely theirs.

Tonight, at first, it felt like something was missing. The mellower songs from Mirage don't led themselves to the straight slam approach, but this is what they got. The result--neither the billowing cobwebbed delicacy of vinyl, nor the mind-scattered total frenzy of live legend, but an inconsiderable bumptiousness, a speed-country tumult that was consistently impressive, but never left you agog. The audience brimmed o'er anyways, such were the pent-up expectations; Curt and Kris Kirkwood flipped their wigs (Kris's a tange of orange tortelloni, Curt's a Ma Bates mop)… but something was missing.

And then suddenly the air was sown with magic; there was an abrupt and unaccountable shift from merely "playing good" to "playing possessed", a sudden, seemingly arbitrary willingness to stretch the borders of the songs, cast loose their mooring in the downhome. Songs like "Out My Way" and "Up on the Sun" --frenetic speedfunk, a manic, flashing secateurs snip'n'clip--hurtle like rocket cars across mud-flats, then careen into prolonged and exhaustive supernovae whose final reverberations seem to take centuries to dissipate. Then there's the brutal plangency of "Hot Pink"--light so intense it's turned solid, a crystal canyon over whose jagged edges your synapses are dragged. "Love Our Children" is rendered straight, then strays into an echoplex meander (although that words suggests listlessness, not a foray this purposeful and driven); the three chord ending is impossibly elaborated, each chord becoming a Niagara of phosphorescent improvisation; the final note dilates into a giant dewdrop the size of a small universe. Finally, it's as though the members of the audience are just motes swirling up the cyclone spout of the Meat Puppets' halcyon chaos.

The Meat Puppets's MOST visionary moments have a blinding brilliance--but that's the definition of "vision": something that interferes with regular, regulated perception, ensures you will never see the world in the same light again.

One of the last decade's best kept secrets, Meat Puppets were/are a trio of sunstruck visionaries from Phoenix, Arizona. Meat Puppets fell through the cracks that demarcated Eighties music: they didn't fit anywhere because they fitted too much into their sound. This compilation documents a decade of "forever changes".

With the debut EP In A Car and LP Meat Puppets 1, it's like peyote has gotten into the water table and spawned a lost tribe of brain-baked bumpkins with their own mutant band of acid-C&W-hardcore-jazz-fission. "Reward" is a Niagara of raving, electrified virtuosity. Their cover of "Tumblin' Tumbleweeds" is even more unraveled, the guitar as eerie as wind whistling through telegraph wires. 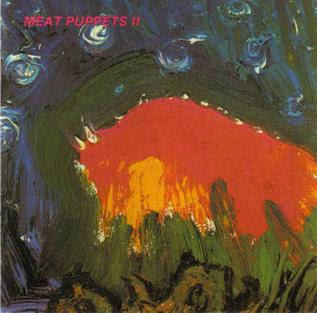 By Meat Puppets II, singer Curt Kirwood had ditched the foaming-at-the-mouth delivery in favour of a frayed country croon, while his guitar-picking shifted from freak-out to a hillbilly Tom Verlaine. Meat Puppets were now clearly "all about" the derangement induced by prolonged exposure to the unrelenting glare and denuded, undifferentiated dunescape of the Arizona desert: a state of grace caught in the line, "I can't see/the end of me/My own expanse/I cannot see". "Lake of Fire" is a shaman's blues after forty daze in the wilderness. "Split Myself in Two" maelstroms along like a tornado-in-reverse, a sandstorm flickering with fleeting, phantasmic, sculpted shapes that suddenly blossom into quicksilver peals worthy of Marquee Moon. And this was back when the only people playing acid rock were Husker Du.

By '85's Up On the Sun, Meat Puppets had added funk to their febrile fusion. Some folks reckon they got within spitting distance of Grateful Dead at this point, but I wouldn't know shit about that. But the title track exemplifies the brutal plangency of their sound: light so intense it's jagged, scraping all the encrusted grot off your senses. At its uttermost, this LP was as radical a rearrangement of rock syntax as "Eight Miles High". But just as this compilation ignores the peaks of the second LP ("We're Here", "Aurora Borealis", "Plateau"), so too it bypasses the high points of Up on the Sun ("Hot Pink", "Away", "Two Rivers") in favour of the more crowd-pleasing numbers: the gladfoot hurtle and rippling radiance of "Swimming Ground", the quirked-out speedfunk of "Buckethead".

Mirage, from 1987, auditioned a mellower, less expansive Meat Puppets, with one eye on the mainstream. But "Confusion Fog" reitereated their "bewilderment in the wilderness" mysticism. In an interview, Kirkwood told me that his visionary tendencies stemmed from a childhood bout of encephalitis; after awakening from the coma, he found that, "I daydream an awful lot. I don't need to take drugs". 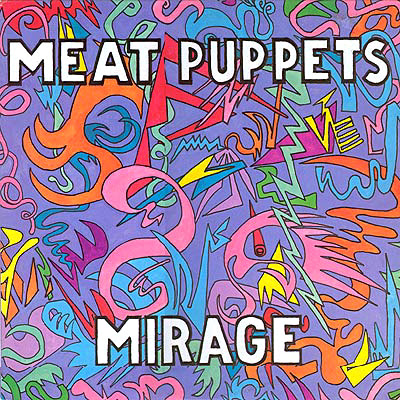 After the dragonflies-in-your-stomach shimmer of Mirage, Meat Puppets went off the boil. Huevos saw them regressing to their teen apprenticeship in boogie bands--all done with exquisite inventiveness, but square-sounding after the solar flair of yore. And last year's Attacked By Monsters was even more metallic, albeit ferociously fluent and dazzlingly nuanced. But one track, "Like Being Alive", was a return to form, the slower pace allowing Kirwood to roam, billow, soar to Hendrix-ian heights.

"To flirt openly with vapour… making love to open windows." At their outermost, Meat Puppets were the pure distillation of the mystically intangible, awe-struck side that some of us liked in R.E.M. . At their peak, they were "heads" adrift without a counter culture to argue their case. But even now Meat Puppets' loss-of-self could be your gain.
Posted by SIMON REYNOLDS at 10:31 AM