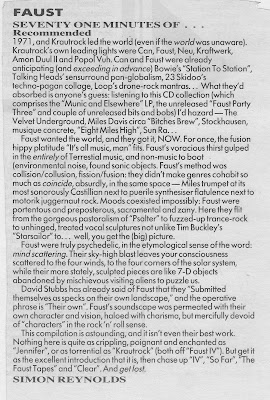 
Krautrock wasn't a movement, but a moment, a final thrust of the psychedelic project to gobble up every kind of music, and every kind of non-musical noise too, in order to excrete the outermost sound conceivable. But there were as many differences as affinities between the principal Krautrock players. If Can were fusion, Faust were fission. Can were into total flow; they oozed a self-irrigating flux of forms that grooved. Faust were more assembled, a concotion of jutting angles, jolting jump-cuts between genres, and jarring juxtapositions. Put simply, Can rolled, Faust rocked.

Faust's aesthetic was one of rupture and randomness. They effected bizzare shifts in tone (from portentious gravity to zany goofing off, from placid poignancy to balls-out aggro) or made oxymoronic collisions of incompatible emotions that resonated like a strange chord. On So Far (1972), Faust proceed from the spartan velvet stomp of Rainy Day through the wistful folk-rock embroidery of "On The Way To Abamae" to the highly frictional funk of "No Harm", spitting out sparks like a rogue trash-compactor. "So Far" itself is a lush labyrinth of tangled tendrils, like Miles Davis jamming with the Velvet Underground while Tim Buckley handles the backing vocals.

Where So Far is at least nominally divided into nine 'songs', the earlier Faust (also known as "Clear" because of it's originally translucent polythene cover imprinted with an X-Rayed hand) consists of three long suites. Each is a quilt patched together from outbursts of acid-rock hoo-ha, zany chorale, found sounds, synnth-gibberish, freeform jazz, nonsense incantations, mock-muzak, animal noises (genuine and falsified), ad infinitum. The music doesn't connect vertically (incongruous noises are built up layer by layer) or horizontally (instead of narrative, it's a string on non-sequiturs). But somehow a wonderful dream-logic imposes itself. Pure Dada again.

Anyone who's loved the last half-decade's reinvention of the guitar--the strange sonorities hewn by Sonic Youth, My Bloody Valentine, Mercury Rev, etc--will instantly recognise Faust as a prime ancestor of 'our music'. These first-time-on-CD re-issues are essential, not just as a history lesson, but as living legacy, and as a reproach to an underachieving age. There's still so far to go.

Faust were born of the Dada-meets-Zen-meets-LSD turmoil of the late Sixties. Their music, created in communal conditions between bouts of nudism, primal-scream therapy and growing their own pot, echoed the spirit of yippie play-power and Situationist prankster politics. Drawing on inputs like the Velvet Underground, New York avant-gardists La Monte Young and Fluxus, and electro-acoustic composer Stockhausen, Faust created four peerless albums of post-psychedelic/proto-punk mayhem, jumpcutting between genres and montaging mangled noise and mystical melody. By 1974 they had disintegrated, but their legacy permeates the post-punk era, from industrial (This Heat, Nurse With Wound, Pere Ubu, Einsturzende) to lo-fi drone-rock (Main, Stereolab, Pavement, Dead C).

20 years from their last official release (the song-oriented Faust IV, their masterpiece according to me, Julian Cope and nobody else), Rien is the return of Faust in all their riotous, rule-defying glory. Constructed partly from live excerpts from their 1994 reunion tour of the USA, which were handed to experimentalist Jim O'Rourke to mess with in the studio, Rien is graced by no songs as eerily lovely as IV's Jennifer. Instead, your ears are greeted with a drone-fest of amp-hum and feedback-miasma, found-sounds and mad-scat vocal gibberish; a wall-of-noise as blank and metallurgical as the matt-grey CD booklet, whose 8 pages are devoid of any information (the credits are instead spoken at the end of the record!). The result is a blank canvas for the imagination; certain passages make me think of Siberia, of sub-zero winds rustling through telegraph wires, but each listener will direct their own mind's eye cinematography. The closest Faust get to rock dynamics is Track 5 (no titles!), where tense, prehensile rhythms instil a mantra-like intensity, and a woozy trumpet is processed so heavily it seems to buckle like wire in a furnance.

Rien is superior to rival Krautrockers Can's own patchy 1989 comeback Rite Time. But inevitably--given that Faust went so far, so every-which-way, the first time around--Rien never really startles. Because the unpredictable is their stock-in-trade, the unexpected precisely what we expect from them, the only way Faust could have really surprised us is by recording, say, a Michael Bolton-style collection of Motown covers. Fanatics will lap Rien up; novices should aquire Faust, So Far, The Faust Tapes and Faust IV first.

Posted by SIMON REYNOLDS at 5:31 PM