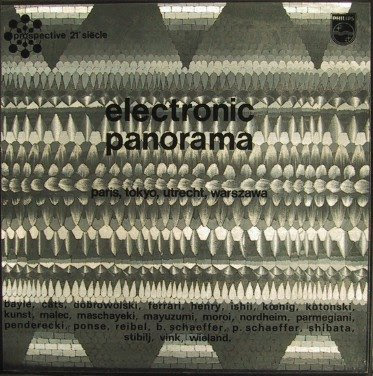 THE INNER SLEEVE: Electronic Panorama The Wire, March 2009 by Simon Reynolds It's tempting to pick a favorite record sleeve based on what a group or genre represents to me. For instance, I could point to the two grubby-looking photocopied paper inserts enfolding a 7 inch that is Scritti Politti's 2nd Peel Session EP. The first sheet carries the group's standard wodge of typewritten data about recording costs (demystify the means of production, to help others do-it-themselves), while the second is pages 179-180 of an imaginary book, Scritto's Republic, containing a lucid exposition of what were then (1979) pretty fresh and pretty mindblowing (to sixteen year old me) ideas about the relationship between language, power and the construction of self. 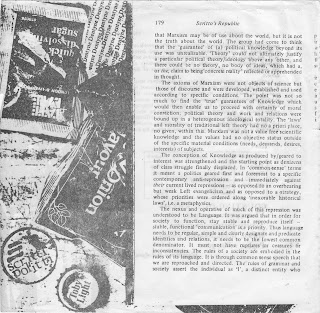 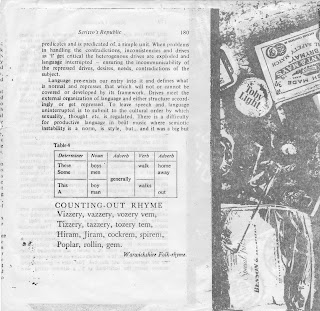 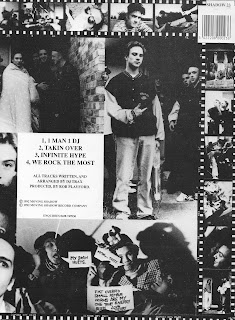 With both Scritti and Moving Shadow, the sounds are fabulous and the movements--postpunk and rave--mean the world to me; made me, in a sense. But these sleeves aren't really things of beauty: graphic designers would frown, while I don't exactly gaze at them in aesthetic rapture. So I feel beholden to pick something that's both lovely-looking and personally meaningful. Which brings me to the series of albums released in the 1960s by Philips under the imprint "Prospective 21eme Siecle," which featured musique concrete and electroacoustic luminaries such as Francois Bayle and Bernard Parmegiani. All the albums are clad in futuristic-looking metallic gloss sleeves with abstract patterns. I picked up my first one (Pierre Henry's Voile d'Orphee I et II, Oxford jumble sale, 1983) unaware that it belonged to a series. To me, it was an eye-catching one-off, competitively priced at just one quid. I vaguely knew who Henry was, the fact that he was important, but my attraction was literally superficial, like a magpie greedily swooping down for a glittering foil wrapper. Which is pretty much what the cover is. (No one seems to know who the series designer was). I confess that at the time I only listened to the record once or twice. The sleeve, however, adorned the walls of my various digs for years (and as a result is BluTak-blemished on its back side). 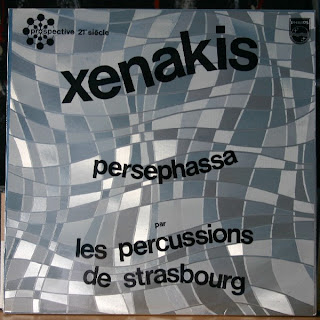 Perhaps the solution is to nominate one I've not got but most covet: that collector's holy grail, Electronic Panorama, a box of four platters each dedicated to music from a different city (Paris, Tokyo, Utrecht, Warsaw). This beaut turns up on Ebay and Gemm regularly, priced way out of my league. One day, maybe… As a smashing-looking artifact and an assemblage of astonishing sounds, Electronic Panorama stands in for the entire Prospective series. It also says something to me about the pathos of collecting, its fetishism and folly. (See, I "have" all of Panorama's sonic contents, they're not hard to find on the web---why then do I crave the music's husk, gorgeous as it is?). Panorama speaks to impulses petty and lofty, childish and superhuman. On the one hand, the seriality of collector desire, the sadsack compulsion to get the complete set (coins, cards, stamps, or in this case, a label catalogue, even though the music can never be all gold--and there's definitely some duds in the Prospective series). On the other hand, Prospective 21eme Siecle embodies with supreme stylishness the awe-inspiring ambition of that post-WW2 drive to open up a new frontier for music. In some ways, the black-and-white sobriety of the back covers--portraits shots of the suit-wearing, bespectacled composers and sleevenotes about complex methodology and grand themes--resonates with me as much as the shiny-shiny fronts. 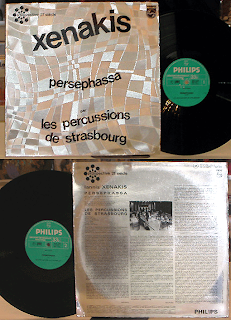 Consider that evocative imprint name. A French friend informs me that "prospective" is a philosophical term to describe the study of possible futures. It fuses "perspective" and "prospection" (as in a prospector exploring a new territory, searching for gold, or indeed silver). Here we are now, some way into the actual 21eme siècle, and there's an "after the gold rush" feel. And I wonder, will we ever again witness anything with that same Eureka!-like spirit of discovery and quest?
You can hear Electronic Panorama in pristine glistening flac at Avant-Garde Project 13 and 14 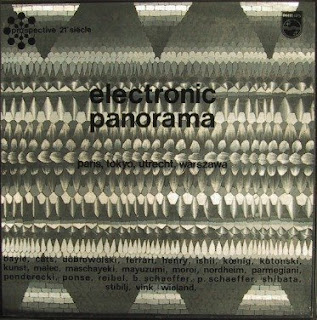 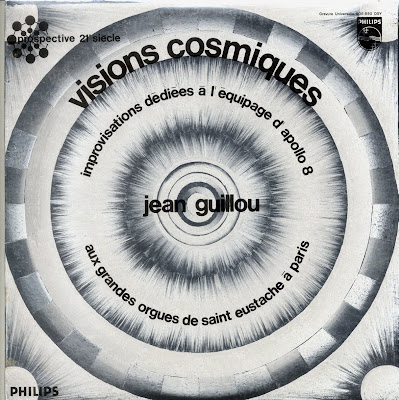 Not long before his untimely death, Anthony H. Wilson opined: "In the North-west it rains and it rains and yet we managed to produce the industrial revolution, the trade union movement, the Communist Manifesto and even the goddam computer. Down south, where the sun never sets, you took all our money and what did you produce? Chas and fucking Dave." It's a snappy little put-down, its well-executed formal structure of build-up and punch-line triggering a chuckle even from a Home Counties boy like myself. A second's scrutiny, of course, and the edifice of argument collapses in a cloud of brick dust. (Put aside the specious Manchester versus London music/culture comparisons… the remark isn't even meteorologically accurate). Just one of countless classic quips from A.H.W, the comment cuts to the essence of the man and the record label made in his image. Full of shit (80 percent of the time, anyway) but always stylishly so. Electronic's "Getting Away With It (All My Life)" --a song whose can't-be-arsed enervation enacts its title perfectly--really was Factory's national anthem.

Let's get indisputable truth out of the way first: Joy Division, one of the greatest rock groups of all time, seals Factory's place in History. Furthermore, late Seventies Manchester, like other Northern cities of the era, roiled with so much postpunk talent that a fair amount plopped into Wilson's lap. I tend to see A Certain Ratio as more of a sketch towards a great idea than the fully realized thing, but their finest four moments--the drummerless "All Night Party", their emaciated version of funk obscurity "Shack Up", the dankly miasmic disco noir of "Flight" and "Knife Slits Water"--are all present on this four-disc box. Then there's Durutti Column, a vehicle for the spidery virtuosity of Viny Reilly, the most gifted guitarist Morrissey would ever work with and someone who could have had a long, productive career at ECM if he'd refrained from (occasionally) singing on his own records.

But even during the postpunk wonder years Factory also housed such enduring legends as John Dowie (present here with "It's Hard To Be An Egg"), X-O-Dus (a decent-enough local reggae band whose "English Black Boys" is really only of historical-sociological interest), and Crispy Ambulance (bizarrely over-rated--by Factory cultists, anyway--but a classic instance of that label syndrome of signing up acts who sound like your most successful act but aren't one tenth as good.) One wonders too about the missed opportunity of that long gap where The Fall didn't have anybody prepared to put out their music (until London hippies Rough Trade scooped up Manchester's equal-first group of the era and released their most sustained stretch of recorded genius). There's likeable moments and compelling curios all across the Early Years of Disc One: pleasing power pop from The Distractions, Crawling Chaos's hysterically lewd "Sex Machine," and Section 25's "Girls Don’t Count," which grinds and pummels like the rockier first side of Closer. But overall, you can see exactly why it was that, at Factory's London showcase of 1980 at the Moonlight Club, Joy Division headlined every bleedin' night.

Factory grew steadily out of step with the times in the early Eighties, when one half of postpunk crossed over into the mainstream as New Pop, while the other half turned into "indie". Failing to talent-spot The Smiths, the label instead issued a long grey streak of what could charitably be described as "late postpunk": Tunnel Vision, The Wake, Stockholm Monsters, Biting Tongues, Royal Family and the Poor. The few bright spots on Disc 2 and 3 stem from the label's unlikely infatuation with New York club culture: New Order, obviously, but also Quando Quango's gawky but boisterously percussive "Love Tempo" and the thrilling synth-shimmers of "Cool As Ice" by local black electrofunk outfit 52nd Street. Cabaret Voltaire, who cropped up first on this box with The Factory Sample's creepy "Baader Meinhof," reappear with a "Yashar" retooled by Manhattan mixologist John Robie. (Then again, they're another Northern band whose classic releases came out on a--spit--Southern label, Rough Trade once more.)

By mid-decade the Factory aesthetic is all over the shop: Wilson's A&R ear fastening one minute on jazzy-souly-Latiny duffers like Swamp Children and Kalima (bands just made for a half-page featurette in The Face circa 1984), the next on shandy-weak C86 also-rans Miaow and Railway Children. To be fair, Wilson did shrewdly see seeds of some sort of greatness in two local oddities. James, in their early days far more intriguing than their later stadium-singalong incarnation, plied a semi-improvised folk-pop of delicate but diamond-hard purity, heard here with "Hymn From a Village." And Happy Mondays: "Freaky Dancing" and "24 Hour Party People" can hardly be said to prophesy rave, but their cack-handed lumpen-funk, midway between Can and Bohannon, does entrance.

And then came Ecstasy and house music to fill up the hitherto deserted dancefloor of the Hacienda. While the Mondays built an audience for their hypno-grooves by peddling pills to the punters, Wilson peddled ideology: a distinctly slanted version of recent pop history in which Manchester invented rave culture (try telling that to the London deejays who holidayed in Ibiza in '86/'87, to the M25 orbital ravers and East End warehouse bods). Even dafter was the notion that "Ecstasy got the white man to dance" for the first time, a Factory party-line touted by everyone from New Order to Stone Roses in blithe disregard of discrepant precedents like jazz funk, Northern Soul, the mods, and trad jazz (whose beery middle class student fans had actually been the first to be slurred "ravers," by the Daily Mail, back in 1962). What the absurd claim really meant was that a certain coterie of grey, overcoat-clad Fac-heads had finally gotten on the good foot.

Yet strangely the label didn't sign up any of Manchester's house music talent, like A Guy Called Gerald or 808 State. As a result, apart from the Happy Mondays tunes that make up a full third of its contents, the post-Ecstasy Factory of Disc Four is a dead zone: a once-great label puttering into insolvent oblivion with New Order side projects Revenge and The Other Two plus the band proper's desperately unmemorable "Fine Time" and cheesy chart-topper "World In Motion', the sub-EMF nothingness of Northside, a Cath Carroll remix… "Sadchester" is more like it. No doubt every ounce of the label's energy was being swallowed by the black hole of the increasingly troubled Hacienda.

I've deliberately exaggerated my opinion here, just like A.H.W would do. But I do genuinely think it's a peculiar thing, this mystique surrounding Factory. You can't imagine anyone making a movie about Rough Trade or 4AD, labels whose respective bosses were never as colourful or charismatic or relentlessly quotable as Wilson for sure, but whose actual output outclasses the Facc lads over the long haul. Still, the sleeves always did look really, really nice.
Posted by SIMON REYNOLDS at 2:09 PM No comments: