"What I've always liked in music is the sense of being
baffled... When you think: 'God! I like this, but I don't
know why!'" For a practising musician, Brian Eno has an
unusually penetrating insight into music. Eno is almost
unique in that by far the best explications of his methods,
aims and achievements, issue from his own mouth.  But then
Eno was one of the first pop musicians who was as much a
critic as a creator.  With Roxy Music, Eno more or less
presided over the birth of meta-rock: music that (self-)
consciously refers to other music.  In a way, this CD box set
tells the story of Eno's growing disenchantment with the
knowingness and referentiality of his early music, and his
quest for a way out of post-modernism's "mire of options"
into a music of forgetfulness and self-elimination.

According to Eno, "the biological function of art is to
expose you to disorientation... Art rehearses you for
uncertainty". Roxy's early music was originally forged in
this spirit.  But success placed them in a position "where
that uncertainty had to go", as did their "insanity...  that
element of clumsiness and grotesqueness".  Eno left in order
to lose himself again in unmapped territory.  He hit upon "a
whole series of tricks and subterfuges that I use to create
an accidental situation..." His aim was "to defeat bits of
me, or amplify bits of me...  I'm looking to reduce my
conscious intervention and get the intuitive parts of me
going". Eno's strategies included chance (the use of a pack
of card with musical ideas written on the back) and
contingency (found sound, tape delay techniques etc).

Another Green World (1975) originates from a strange
period in rock history when Eno could call on the talents of
both John Cale and Phil Collins without it seeming
incongruous. What Another Green World reminds me most of is
The Residents' "Commercial Album". It's a collection of
musical sketches: sometimes exquisite watercolours, sometimes
lamentably Python-esque skits. Both "In Dark Trees" and
"Zawinul/Lava" anticipate the stark, Satie-esque simplicity
of the instrumental half of David Sylvian's "Gone To Earth":
the former, a mind's eye vista of paddy fields and aquaducts,
the latter, a rainforest's dawn chorus.

But for each of these succint, spare studies, there's a terribly dated item of
English eccentricity, with the Eno persona pitched somewhere
between Cat Stevens and Bill Nelson. "I'll Come Running" is
Gilbert O' Sullivan on LSD, all plinky plonky piano and cod-
surrealist couplets. Elsewhere on the album, "The Big Ship"
is a prototype for the second side of  Low; "Sombre
Reptiles" sounds like dying rock dinosaurs languishing in
their own equivalent of the elephant's graveyard, while the
title track you'll already know and love as that most restful
theme tune for BBC2's Arena.

Before And After Science (1977) was one of Eno's most
feted albums, and one of the ones he personally rated least.
Listening now, one can only agree with his verdict. It's a
curiously muted, indistinct record; an oddly centre-less
music, teeming with beautiful detail (guitar filigrees as
graceful as Japanese calligraphy, mysterious sounds
shimmering in the furthest corners of the mix), but unhappily
placed midway between dispersal and focus.  The subdued warp-
funk of "No One Receiving" looks forward to Fear Of Music
and Remain In Light. "Backwater" is uptempo, quirked-out
pop, riddled with twee rhymes like "a Senator from Ecuador
who talked about a meteor... passed it on to a conquistador".

As with Another Green World, every so often there's a
pretty sound-painting like "Energy Fools The Magician", but
in the main tracks like "King's Lead Hat" fall within the
manageable orbit of Anglo eccentricity. (At the time Eno was
fond of patronising forgettable curios like the Portsmouth
Sinfonetta). Only later was Eno to go out-of-orbit, into
truly dis-orientating territory.

So funnily enough, by far the most absorbing and simply
beautiful music in this box set is Apollo, a collection of
"atmospheres and soundtracks" for Al Reinhert's film of the
moon landings - an album disregarded in its day (1983) as
just another in Eno's ambient series. With his forays into
ambience, Eno went from meta-rock (which relies on the
listener being thoroughly schooled in rock history, in order
to understand the mischievous mis-appropriation of that
history) to infra-rock.  The impressionism of the early solo
albums gives way to a total atomisation of sound.  Eno
compared ambience with Monet's "Waterlilies": huge canvases
but without "any predominant features... your eye focusses on
no landmark, the whole thing is a continuous rippling
surface.  Close up, the intricacy is amazing. You have to
wander through them. I can gaze at them for hours and never
get bored".

Eno's ideas about ambient music have an affinity
with that currently fashionable area in modern science called
"chaos theory", which focuses on phenomena that are
structured but impossible to predict (cloud patterns, the
crystalline structure of snowflakes, the movements of
fluids), and whose infinite variability is captivating.
Ambient music's paradoxes (it's both serene and chaotic,
intimate and impersonal, sedative and utterly absorbing)
satisfied the demand Eno had always made of pop: blissful
bafflement.

Apollo attempts to supplant the official version of
space travel (another giant step in man's mastery of the
cosmos) and rewrite it as an experience of estrangement,
humility and awe. The sound of "Apollo" consists of twinkling
clusters, remote susurrations and rumblings, an infinite
recession of motes into the backwaters of the galaxy. Lovely.

Another of EG's 20th Birthday box sets comes from
KING CRIMSON, the band captained by sometime Eno collaborator
and guitar virtuoso Robert Fripp. This stuff has dated very
badly indeed. The multi-million selling In the Court Of The
Crimson King (1969) is a baroque'n'roll calamity. "21st
Century Schizoid Man" is a typical Crimson frightmare, all
scrofulous, overwraught improvisation and brash, blaring
saxophone.  "I Talk To The Wind" is an almost fetching piece
of pastoral psychedelia, marred by a flute (never a good
idea). And "Epitaph" inhabits much the same plush boudoir of
mock-despair as "Nights In White Satin". Larks' Tongues In
Aspic (1973) is more bearable, the title track leapfrogging
between Oriental reveries and art school Sabbath heaviosity.

Discipline (1981), with execrable vocalist Peter Sinfield
long since banished in favour of Adrian Belew, is almost
listenable. "Elephant Talk", for instance, is a prog rock
version of Tom Tom Club's "Wordy Rapppinghood", with its
corrugaged mutant funk riffs and lyrical romp through Roget:
"ballyhoo and balderdash ...  diatribe and dissension".  It
doesn't sound nearly as redundant now as it must have done in
'81.


2020 note: Well, it's interesting how taste can shift around over time... Another Green World is now one of my all time favorite albums (and in the Eno-alone chart would be in a tight cluster at the top with On Land, My Life in the Bush of Ghosts, Plateaux of Mirrors) and  Before and After Science I like a lot more (especially the washed-out / washed-up songs about castaways at the end of time type tunes). Apollo, conversely, I find "nice", but never play.

King Crimson, also, I've come to appreciate if not quite adore.

Posted by SIMON REYNOLDS at 1:14 PM No comments: 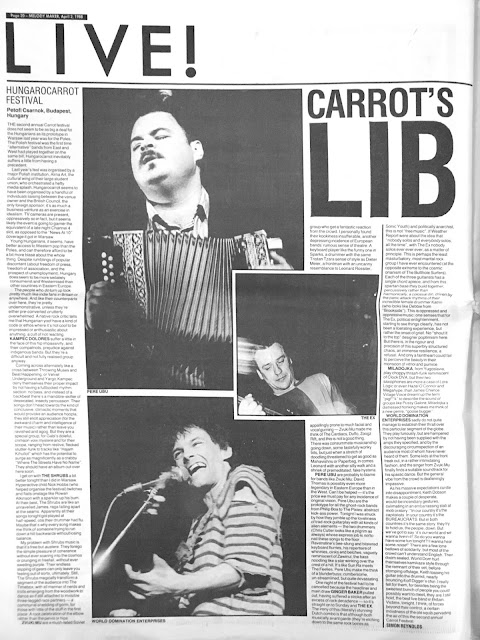 Posted by SIMON REYNOLDS at 7:03 PM No comments: 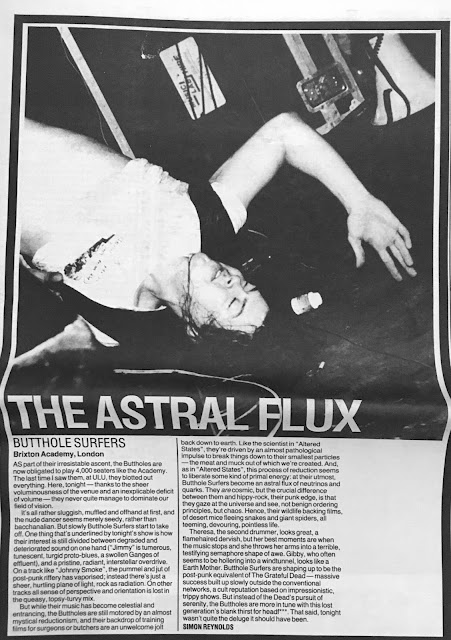 Posted by SIMON REYNOLDS at 5:09 PM No comments: