Gene Clark - No Other 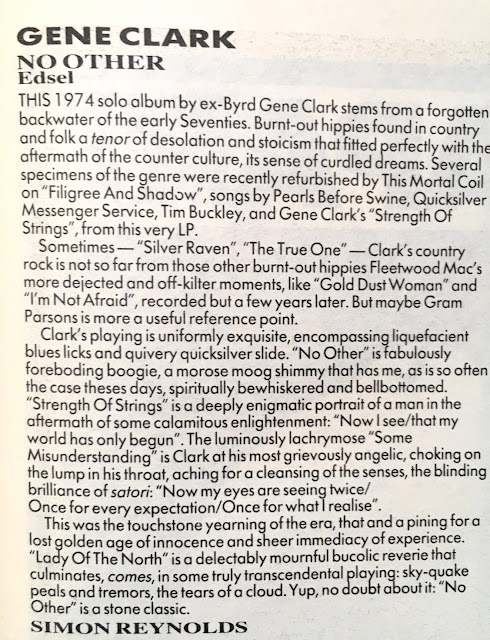 Posted by SIMON REYNOLDS at 5:07 PM No comments: 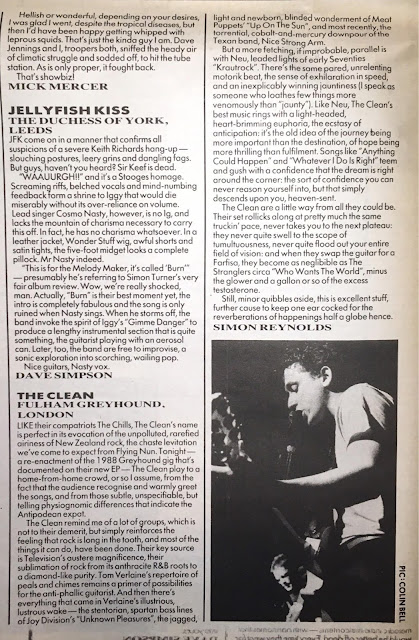 Posted by SIMON REYNOLDS at 4:49 PM No comments:

From the start, The Residents had a parasitical relation

to the pop culture that surrounded them. The sleevenotes to

"Meet The Residents", their 1973 debut, describes how they

spent the Sixties scavenging together a collection of sonic

sales ... even a few bootleg tapes of well-known pop artists

going avant-garde between takes". They were samplers long

before the invention of the Sampler.

The early Seventies were a time when pop culture had

become so pervasive, so totalitarian, that its myths and

matter.  Glam was one version of this meta-pop practice

(whether self-consciously articulated, as with Ziggy Stardust

and Roxy Music, or brutally vacant as with Glitter). The

avant-garde vandalism of The Residents was another. "Meet The

Residents", with its grotequely defaced Beatles cover, was

the birth of what has since become practically a genre of

of The Band, of all people: a polyglot commingling of

jazz). But in The Residents' case, it's as though this

poly-rhythmic bouillabaise is being played on invented

instruments, or has been adapted to non-Western scales with

this planet's Esperanto of desire. It turns Sixties pop into

the soundtrack for Hitler's Blitzkrieg. "Swastikas On Parade"

is a segue of bubblegum classics like "Psychotic Reaction",

"Hitler Was A Vegetarian" is a more downered trek through

and "Gloria". Imagine The Clangers aspiring to the poignancyt

of Erik Satie.  "Third Reich 'N' Roll' is probably The

Residents' masterpiece.  As an added bonus, the CD includes

their hell-spawn (per)version of "Satisfaction", and "Beyond

Beatles' wiggier moments are reconstructed into a wholly new

first time in its full length. Along with the Hawaian guitar

pastiche "You yesyesyes" and the hilarious "Godsong" ("all

that God wanted to be/Just a normal deity"), there's two

described as a mini-opera, consists of electro pulsations

hillybilly twang. "Six Things To A Cycle" (a ballet) is an

atypically tropical suite of of crazy percussion and

25th Century nursery rhymes, conceived in the spirit of Dada

and Alfred Jarry. It's accompanied by "Goosembump", a

project undertaken with Snakefinger, whose aim was to bring

to the fore the macabre overtones latent in kindergarten

ditties. All the sounds were produced from childrens' toys,

but were drastically peculiarised by "adult studio toys". The

result is a suite of nauseatingly rubberised nursery rhymes,

that at times ("Three Blind Mice") are creepy almost

Even more unsettling is "Eskimo", The Residents' 1979

Americanised Eskimo. While their relativistic tolerance for Inuit

newborn girls) is a tad dubious, the album is a superb sonic

(walrus hunts conducted in conditions of

"Not Available" was actually recorded in '74, in

accordance with N. Senada's "theory of obscurity": the idea

that creating music in the understanding that it is never to

be heard, is the only way to avoid subconsiously pandering to

an audience. But Ralph Records slipped it out surreptitiously

in '78, when The Residents were falling behind their deadline

for "Eskimo". It's not that radical, actually: its cheapo,

pre-programmed beats making it a distant, Dadaist cousin to

"The Commercial Album" (1980) is probably the best

introduction to The Residents. It consists of 40 pieces each

exactly one minute long. The idea is that, since most pop

songs contain a verse and chorus repeated three times within

three minutes, if you condense that span down to one minute

(the length of most commericals) you get the kernel of the

song without the extraneous matter. Here, the result is a

collection of 'jingles' as intricate and succint as a haiku

poem (one of the prettiest is called "Japanese Watercolour")

and a sound somewhere between the Human League circa

"Reproduction" and the Suicide of "Dance".

After "The Commercial Album", The Residents seemed to

lose their way. "The Mole Trilogy" and its sequels "Tunes of

Two Cities" and "The Big Bubble" amount to an impenetrable

allegory of something-or-other. Only the most dedicated fan

could be bothered to slog through through the dank, drab

textures of "The Mole Trilogy" to reach enlightenment. Then

there's the flaccid "God In Three Persons", a couple of live

albums, and a fine collection of material by Snakefinger

Residents 20 year project of tributes) has brought back a

measure of rejuvenation to their sound. It seems we can

apprehend more clearly the nature of their alien-ating method

when they bring their warp factor to bear on something we

Posted by SIMON REYNOLDS at 12:27 PM No comments:

The Stars Are So Big, The Earth Is So Small… Stay As You Are

Forget the retro-parochialism of Blur et al: this is truly English music, so English it’s barely rock. Everything about this band--from Rosie’s pure, un-American tones and junkshop keyboard, to the way the percussion (played on a homemade kit) is a decorative thread in the tapestry rather than a driving backbeat, to the name Pram (with its whiff of domesticity, mundane modesty, and quaintness) suggest that Pram are reviving that tradition of squatland anti-rockism (The Raincoats, This Heat, early Scritti and other Peel favourites) that petered out in the early Eighties.

Like their precursors, Pram refuse the simpleton satisfaction of kick-ass dynamics in favour of pleasurable perplexity, abstruse enchantment, and cerebral stimulation. This is exactly what I want to hear right now.

Pram are siblings of the American lo-fi anti-grunge revolt (Thinking Fellers etc) but without the wisecracking absurdism and overly obvious Krautrock influences. Instead songs like “Radio Freak In A Storm” (a clucking, wheezing sonic contraption, all hazy harmonium and squawking trumpet) make Pram the only band I’ve ever heard who appear to be influenced by The Raincoats’ neglected mistresspiece Odyshape. The Raincoats compositional method was closer to knitting than jamming; Pram share that homespun approach.

They aren’t always a rarefied, non-physical proposition: the eerieness of ‘Loredo Venus’ woozes around a rumbling, dub-funk bassline. But mostly, this is meditative, mesmeric head-and-heart music. After years of full-blooded, testosterone-pulsing music, Pram are valorously anemic.

Lyrically, the vibe lies somewhere between personal politics and magical realism: imagery of dislocation, dazed anomie, the kind of spooky stagnation captured by the Mekons at their most haunting and rootless. Trapped lives, festering desires, and forlorn fantasies of transcendence. The 17 minute ebb’n’sprawl of “In Dreams You Too Can Fly” does for dejection what Tim Buckley’s Starsailor did for the erection, i.e. make it cosmic. “Cape St Vincent” is kindermusik for the orphaned of this world, while “Dorothy” faintly recalls early Eighties keyboard-based acid-trance gods The Blue Orchids.

The future of British music lies in un-rocking rock, either by demoting the guitar to a bit part (the Pram method) or feeding the guitar through the sampler’s digestive tract (MBV, Seefeel etc). The Stars Are So Big suggests that Pram will have a large role in that future: a future that’s looking brighter every day.

Posted by SIMON REYNOLDS at 10:15 AM No comments: 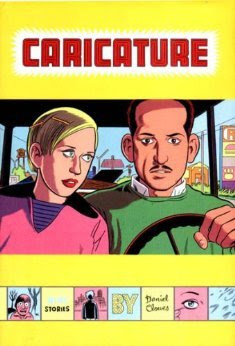 Cartoonist Daniel Clowes's stories are set  in some  all-American twilight zone of Hopper-esque diners, lugubrious motel rooms and desolate streetscapes. Time and place are deliberately left non-specific--it's the Big City, any-postwar-year-- allowing Clowes to indulge his fondness for  the kind of quaint furnishings and appliances (e.g. barber's chairs) that now sell as overpriced antiques in  "architectural salvage" stores.  Some of the stories in Clowes' new collection Caricature veer into the full-on noir surrealism of  Like A Velvet Glove Cast In Iron  (his famous Twin Peaks-like serial driven  by non-sequiturs and a mystery narrative that never resolves itself). But most develop further the seedy realism of  his superb 1997 graphic novel Ghost World,  conjuring a world that's all the more uncanny because the blatantly supernatural rarely occurs. Caricature's most poignant stories seem autobiographical:   brink-of-puberty vignettes "Immortal, Invisible" and "Like A Weed, Joe", and  "Blue Italian Shit", a memoir of life as johnny-come-lately punk at the tail end of the Seventies. From the title story's fairground caricaturist to the decrepit  cartoon superhero in "Black Nylon" and the pugnacious epigone in "MCMLXVI"  (who believes American culture peaked circa 1966) Clowes's forte is stalled lives and blocked dreams. Nobody  can rival him when it comes to the physiognomy of anomie--he's  a virtuoso at jaded eyes, non-commital mouths, and the myriad facial nuances of affectlessness. 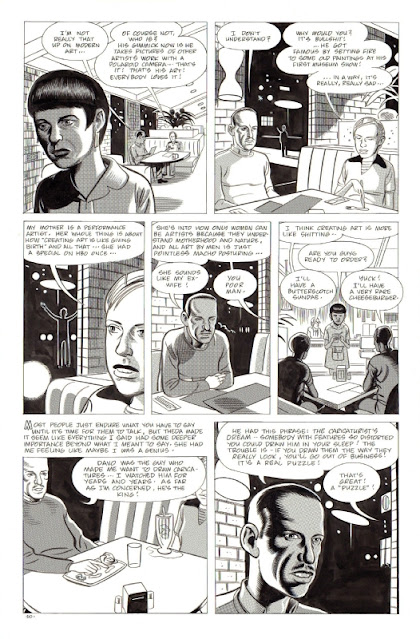 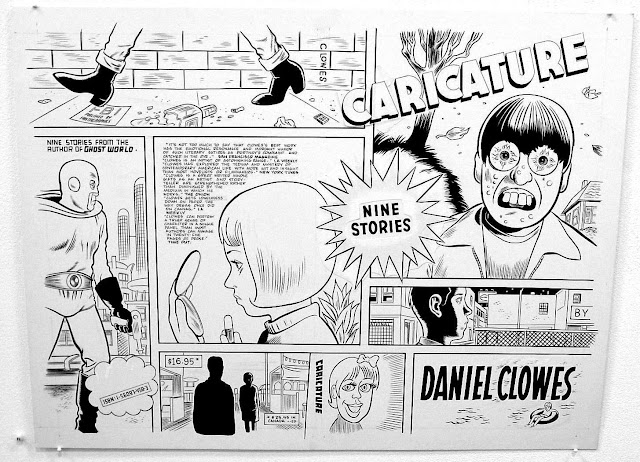 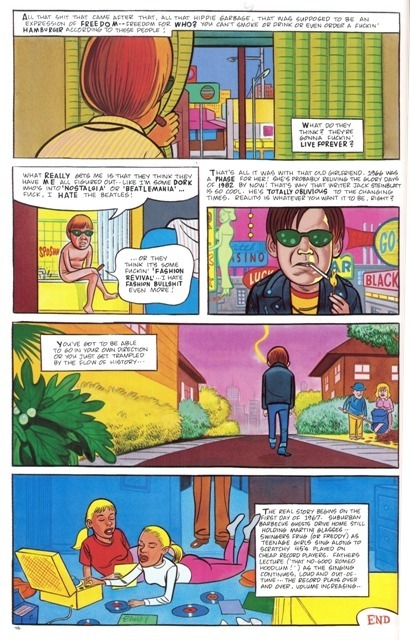 Posted by SIMON REYNOLDS at 10:33 AM No comments:

Tis the season to be spooky. From the label Ghostbox to Ariel Pink’s Haunted Graffiti albums, the notion of spectral music is the meme of the moment. Last year Infantjoy’s debut Where the Night Goes featured a cover of ’s synth-noir classic “Ghosts” . Now the sequel With arrives bearing a manifesto of sorts in the form of “Absence”. “It is necessary to speak of the ghost” intones Paul Morley, half of Infantjoy alongside ex-Auteur James Banbury. “Speak to the spectre, engage it… … do not command it… but dance with it… We are always haunted by ghosts and we cannot freely choose what we will be haunted by.”

With is something of a ghost version of Where the Night Goes, encompassing  remixes of the latter’s tracks by various kindred, erm, spirits in the electronic field as well as all-new tracks like “A Haunted Space” (sensing a bit of theme here?). “Ghosts” itself rematerializes in a spare, stealthy treatment by Popolous that gives even more prominence to the gorgeous vocals of Sarah Nixey, whose uncanny Kate Bush-like tones conjure up a parallel pop universe where the raven-haired goddess fronted in David Sylvian’s stead. Isan’s remake of “Composure” transports the original’s rolling, reverberant piano chords into a frosted wonderland of electronic tingles and sample-stretched sighs.

Sound’s insubstantiality, the way that music always elude our attempts to fix and define,  is a major Morley obsession, and in this spirit With keeps hazy the question of authorship and attribution, so that you’re never quite sure who’s remixing whom. “Someone with Handshake” for instance, appears to be a collaboration between two guest producers, Someone and Handshake, with Infantjoy’s involvement quite possibly limited to having convened the encounter.  Unless the track’s digitally mangled voice, which sounds like it’s covered with furry spikes like a crystal forming in a solution, is actually  Morley’s. By the track’s end, its heavily-processed beats are so encrusted with gnarly texture, the groove almost grinds to a halt.

Infantjoy confirms Morley’s membership of a select group of rock writers who’ve crossed the line into music-making without disgracing themselves. A concept album about Erik Satie,  Where the Night Goes formed a 20th Century modernism continuum with the Art of Noise: the Futurism and Dada coordinates of 1983’s Into Battle, the Debussy-meets-drum’n’bass of AoN’s resurrection in the late 1980s. The claims for Satie are slightly overblown (“just about every radical musical movement of the past one hundred years” traceable back to Trois Gymnopedies and “furniture music”? Tell that to Duke Ellington, James Brown, King Tubby, and a good dozen more--mostly black--innovators). But the fantasy underlying this polemic-- an alternative history of pop in which America and rock’n’soul never existed, a straight line from Russolo through Stockhausen, Pierre Henry, Kraftwerk, Eno, Oval, to, well, Infantjoy--makes for a compellingly dissident vision, with an absorbing, eerie sound to match.

Posted by SIMON REYNOLDS at 10:10 AM No comments: