Pipping Kraftwerk to the post, paving the way for Suicide, Silver Apples were the first rock band to use synthesisers as their art's core, as opposed to mere ornamentation.  They were a duo, percussionist/vocalist Danny Taylor and a chap called Simeon who identified so strongly with his self-cobbled instrument (a bunch of audio-oscillators with 86 manual controls) that he called it The Simeon. He also sang and strummed the banjo a bit.  After two decades of being legendary but little heard, the band's two virtually unfindable LP's, 1968's 'Silver Apples' and 1969's 'Contact' have been compacted onto a single silver disc. 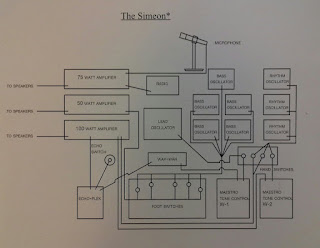 Hooray for that, and about fucking time.  For this is astounding stuff, a manic, mantric, mesmerising head-rush that's the missing link between the acid-rock of 13th Floor Elevators and the aciiiied tekno of RichieHawtin/FUSE/Plastikman. When Taylor and Simeon start yowling about "oscillations, oscillations, electronic evocations...spinning magnetic fluctuations" in their highly-strung quaver, they're clearly singing from the same acid-scorched mind-zone as Roky Erikson, i.e. the 'white light' stage of sub-atomic consciousness that's the ultimate level of the LSD experience.  But musically, these late Sixties tracks contain in germ form the oscillator-riffs, pulse-sequences and frequency-arpeggios that make up the lexicon of techno today.

The sense of prophecy is uncanny. "Velvet Cave" could be '92-style 'ardkore, layering Joey Beltram sine-wave synth over fitful fatback funk.  "Program" even features 'sampling', in the form of bursts of radio broadcast--adverts, classical fanfares, shortwave Italian, and so on. Hell, with the banjo-driven "Ruby" and "Confusion" they even got to the hillybilly/techno hybrid 25 years ahead of The Grid!    Only the occasional dippy song-title ("Sea Green Serenades", "Lovefingers", "Whirly-Bird") and the Grace Slick-like balefulness of the vocals on the wonderfully accusatory "A Pox On You",  hint that these guys are hippies. How they ever managed to get so far ahead of their own time, we'll probably never know, but this record is no historical curio--it's mindblowing in an eerily contemporary way.
^^^^^^^^^^^^^^^^^^
Check out these pieces by Lee Shook
- on a Silver Apples performance in Central Park celebrating the Moon landing
- a memorial tribute to Coxe
- based around this vintage article by Simeon Coxe, a "biography" of the Simeon synthesizer published in Other Scenes magazine 1969,  with some photos of Coxe playing the machine onstage 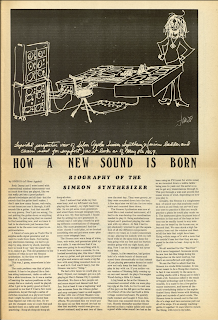 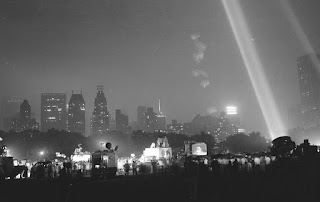 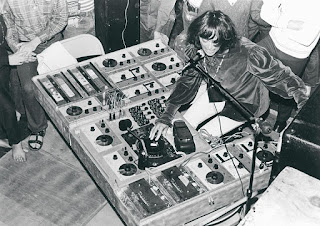 Posted by SIMON REYNOLDS at 1:48 PM No comments: