Tonight, Mudhoney are a chastening experience for me. And, as our "emergent underground" hardens into homogeneity, as certain ideas congeal into a new orthodoxy, so I expect to have more and more encounters as schizoid as this one. See, Mudhoney tonight managed the singular feat of being utterly entertaining, and yet, at some deeper level, tedious beyond belief. I was bored, almost literally, to the brink of tears.

That a band can be this urgent, and yet so uninvolving, this frenzied, and yet so ultimately immobile, this charged, and yet so fundamentally lazy, is a testament to some kind of dire deadlock. The moment has passed, an impasse has been
reached. It would be more rewarding to watch someone struggle, uncomfortably and unsuccessfully, to get to some beyond, than to witness something as consummate as Mudhoney.

For Mudhoney are immaculate. Every thrust, rip, rent, howl, jut and jive is perfectly placed, and asserts, with a conviction that's utterly convinving, that punk's not dead. And I don't mean some privileged moment in '76, but punk as Lester Bangs invented it, the bad boy trash lineage that runs from rockabilly, through Sixties garage, Seventies gumbo metal to contemporary thrash. It's alive and burning still. Mudhoney have the riffs, the songs, the vehemence, the
attitude, the windmilling longhair, the witticisms ... "I'll give $50 to the first guy to come onstage and throw his guts up", "we're not playing another song until they erect a stage barrier", "we're tired of all you over-active young people,
let's have some old people up the front now" ... They've only just begun and already they're washed up, standing still at a point of perfection, giving the people what they want, fitting our talk without testing it, meeting our need without
stretching it.

"Mud Ride" tells the oldest story in hardcore, abduction and murder, froths at the mouth about "taking you any place/there's no place to hide", but no one here is remotely endangered. It's a scenario that's already becoming as cosy as the ritual narratives of heavy metal or Oi.

Maybe Mudhoney exhaust me because every word they incite in my mind feels tired and tame in the mouth. Maybe that's just my problem. But maybe - and it's worth considering - the teen sicko raving bloody mess-thetic is spent. Maybe trash is just trash. Sonic Youth have reinvented New York as a city of ghosts. Spacemen 3 have turned to ether. Pixies are now sculpted in five dimensions. So far, Mudhoney have set things up so that their only future is as the oldest teenagers in town. What they do, nobody does better. Do we need it anymore?
Posted by SIMON REYNOLDS at 6:54 AM No comments:

Whatever way you define the essence of rock'n'roll--sex or dance or drugs, rage to live or rage against the machine--the common denominator shared by all these body/mind states is intensity. Rock'n'roll doesn't have to be fast or loud, but it's gotta have that feeling of incandescent immersion in the here-and-now.

Perhaps there's never been rock music so consumed by a tense present as mid-Sixties garage punk--that shambolic movement of white American teen bands who bastardised the already crude caricature of black rhythm-and-blues perpetrated by Brit Invaders such as The Kinks and The Yardbirds. The result was a comically exaggerated hypermachismo whose barely concealed subtext was virginity blues. Hence the volcano-of-pent-up-sperm that is "Action Woman" by The Litter, whose singer threatens to trade in his current girl for a more compliant model who'll provide "satisfaction" (that highly-charged buzzword of the mid-Sixties). But although its motor is usually sex and/or sexism, the greatest music of the "punkadelic" era achieves a kind of abstract urgency; "content" spontaneously combusts in an energy-flash of lust without object or objective.

Rhino's four-CD Nuggets dramatically expands on the original 1972 anthology. Lenny Kaye's feat of creative archivalism simultaneously altered the contours of the rock canon (deposing the Beatles/Cream aristocracy in favor of the disregarded one-hit wonders of the pre-Sgt Pepper's era: Count Five, The Seeds, Thirteenth Floor Elevators, The Standells, Shadows of Knight) and shaped rock's no-future (Nuggets was a primary resource for proto-punkers such as Pere Ubu and Television). Kaye's original double elpee takes up the first
silver disc; the other three scoop up a legion of regional smashes and one-miss blunders.

Although there's a well-produced surfeit of bubblegum-psych and frat-party bop, and not nearly enough of the inspired lo-fi ineptitude you'll find on obscurantist garage comps like Pebbles and Mindrockers, this new Nuggets contains way too many gems to list here: the ear-dazzling flare of Nazz's "Open My Eyes", the lysergic oneupmanship of The Third Bardo's "I'm Five Years Ahead of My Time," the paranoid delirium tremens of The Music Machine's "Talk Talk," the louche swagger of Chocolate Watchband's saliva-drooling Stones pastiche "Sweet Young Thing." My absolute all-time fave spurt of G-punk , though, is We The People's "You Burn Me Up And Down", which you can also find on Sundazed's superb anthology of the band's output, Mirror Of Our Minds. A sensual inferno of turbid fuzztone and jagged riffs, "Burn Me Up" is a hormonally-crazed paean that shifts from the
eros-tormented gasp "baby, you're learnin'" to the era's ultimate
compliment: "you satisfier!"

But this is history, right? Well, no, actually. In "Burn Me Up," I
hear not just the ancestry for My Bloody Valentine's kissed-out "Slow" but the secret spiritual source for The Prodigy's "Firestarter", Big Beat monstertunes such as Fatboy's "Everybody Loves A Filter", and a thousand hardcore rave anthems . Punk to funk, garage bands to computer-in-the-bedroom junglists , you can trace a continuum of teenagers hopped up on stimulants (or fervently pretending to be)
and literally electrified by the latest noise-toys (wah-wah pedals
in '66, samplers in '92). If Nuggets is "educational", it's 'cos it's
an endlessly renewable refresher course in how to live like you're on fire. The guys responsible may now all be bank managers or professors of astronomy (like the singer in Chocolate Watchband!) but right here, right now, they're aliver than you or I will ever be.
Posted by SIMON REYNOLDS at 6:48 AM 1 comment:

THE CREATION
How Does It Feel To Feel
(Edsel)
Melody Maker, 199?

Posted by SIMON REYNOLDS at 5:37 PM No comments:

Posted by SIMON REYNOLDS at 5:37 PM No comments: 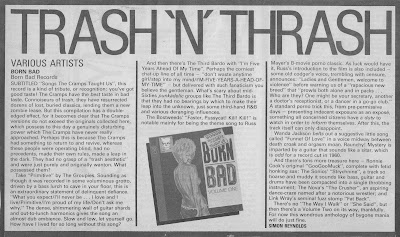 Posted by SIMON REYNOLDS at 5:36 PM No comments: