Pushed by music magazines and rock documentary makers, “the place to be” is a perennially alluring notion. The conviction that a single city – London, San Francisco, Manchester, Seattle, Berlin—is currently pop culture’s energy center, a vortex fermenting  new sounds and styles that will bubble up from the underground to transform the mainstream, draws the ambitious, the curious, and a legion of misfits chafing at the constraints of their suburban or small-town home.  Retro culture adds a layer of elegiac wistfulness to this “anywhere but here” impulse, instilling the belief that that there was “the time to be” too, that born-too-late sense of being one of History’s provincials, stranded faraway in time from the action.

On New York in the ‘70s Luke Haines seems at once seduced by and sceptical toward this idea that certain towns at certain times buzzed with extraordinary energy.  A mildly provocative figure on the periphery of the U.K. pop/rock mainstream for two decades now, Haines was the driving force behind The Auteurs and Black Box Recorder, and, since 2001, he’s been a prolific solo artist. New York is actually his tenth solo album. It also closes out a diverting if opaque-in-intent trilogy that began with 2011’s 9 and a half Psychedelic Meditations on British Wrestling From the 1970s and continued with last year’s Rock and Roll Animals.

Haines’s meta-musician tendencies were apparent from the start:  The Auteurs’s 1993 debut LP was titled New Wave, featured songs with titles like “American Guitars”, and was framed by its author as a celebration of quintessentially English “wryness and dryness” (think Kinks) in defiance of then dominant grunge aesthetics.  More recently, “The Heritage Rock Revolution”, from 2006’s Off My Rocker At the Art School Bop, mocked the reenactments of past glories served up by rock’s nostalgia industry. “It’s a middle-aged rampage/NOW!” Haines sang, wittily inverting the chorus of The Sweet’s glam-anthem “Teenage Rampage”.   Whether tacking against the tide of the contemporary scene or playing games with history, Haines’s music always seems to be commenting on other music.

The odd thing about New York in the ‘70s is that the period Haines is revisiting—post-Warhol decadence, protopunk, the Max’s Kansas City and CBGBs milieu—is that this was the point at which rock itself took a self-reflexive turn. The New York Dolls were Stones impersonators and girl-group fans who quoted The Shangri-Las and hired their producer Shadow Morton to do their second album;  Patti Smith covered The Who and Them, wrote elegies to Jim Morrison and Hendrix;  Suicide’s Alan Vega channeled Elvis;  The Ramones and The Dictators were virtually scholars of teen delinquent rock.  So what does adding another layer of reflexivity and reference contribute,  when the music in question is already self-consciously tangled up and tangling with rock history?

Listening to New York in the ‘70s, it’s not readily apparent what Haines is trying to say.  Just like that flatly descriptive album title, the songs sit there, blank regenerations of time-honored templates, ranging from precise pastiches of legends like Suicide (“Drone City” duplicates  “Frankie Teardrop” complete with psychotic gulps and gasps)  to generically NYC/1970s-evoking songs in a “Loaded” Velvets/ Lou Reed-solo style.  Not content with giving his ditties titleslike“Alan Vega Says”, “Jim Carroll” , “Dolls Forever”, and “Lou Reed Lou Reed”, Haines often lets his lyrics devolve into a string of citations and famous-first-name allusions: Debbie, DeeDee, Bill (as in Burroughs), and so on.

Lloyd Cole, another Manhattan-infatuated Brit songwriter, dubbed this lyrical technique “proper noun as metaphor and simile” and claimed to have invented it (Bryan Ferry got there first, surely?).  Cole is a telling comparison, actually: like his immediate predecessors Orange Juice, he translated Reed-isms into an authentically U.K. realm of   bookish bedsit romanticism (girlfriends who drive their mother’s old 2CVs, etc). But on New York Haines does nothing with the source material: takes its nowhere, barely even twists it.

Really, the only tint of difference is tonal: droll, with a hint of smirk. New York in the ‘70s ought to be filed under parody-rock, next to Alberto y Lost Trios Paranoia, the XTC side/psych project Dukes of Stratosphear, and ex-Bonzo Neil Innes’s tunes for The Rutles. As the literary critic Linda Hutcheon observes, parody sanctions what in any other context would be dismissed as derivative and redundant. Laughter (and perhaps also a smidgeon of appreciation for the craft involved in these replicas) excuses what otherwise is merely empty impersonation.

The mirth on offer here is thin fare, for the most part. Certainly compared with New York’s  immediate predecessor  Rock and Roll Animals, whose Mighty Boosh-like conceit --rock history reimagined as an anthropomorphic children’s fable, starring “Jimmy Pursey, a fox...   Gene Vincent, the cat...  and a badger called Nick Lowe”-- was strong and strange enough to sustain a whole album.  The only time New York strays into a similar zone of surreal whimsy is “Cerne Abbas Man”, in which the 180-foot-high priapic figure cut into Dorset hillside turf aeons ago comes alive and goes to war with the Lower East Side’s junkie poets.   Swinging “his giant glans straight into Manhattan,” the original Rude Man gives Richard Hell the “heebie-jeebies” and jolts “the ghost of Johnny Thunders,” who rasps “don’t point that thing at me, buddy”.  The idea seems to be a battle of primordial mojo between ancient Albion and “mythic motherfuckin’ rock’n’roll,” with the older culture wiping the floor with those young pretenders from the New World.

The blurb for Post Everything, the second of Haines’s two Britpop memoirs, argues that “if it feels like there's nothing new under the sun, that's because there is nothing new under the sun”.  The same applies to New York in the ‘70s which oddly resembles a project from the early ‘90s, roughly contemporaneous with The Auteurs: Denim, a group created by Lawrence from Felt, in which he swapped his own VU/Dylan/Television fixations for Seventies English glitter pop at its most lumpen and trashy.  New York and 1992’s Back in Denim share the same boxy sonics and vocals that clone Lou Reed’s sing-speak drone.  But not only were Denim’s hooks zippier and lyrics funnier,  Lawrence’s polemic also had real bite at that point in time: songs like “Middle of the Road”  junked hip taste and canonical rock for the uncool thrills of plebeian tat.   What came through too was Lawrence’s love for the music, his delight in rediscovering records by The Glitter Band and Hello.

But it’s never clear what Haines really feels about the proto-punk New York of the Seventies.  (Personally the period after Loaded and before Marquee Moon strikes me as historically significant and importantly transitional, but surprisingly thin in terms of actual musical achievement). My guess is that his younger self’s fascination for the era of Max’s, Mercer Arts Center, etc, and for that whole bohemian quest for some kind of truth or ultimate reality (Patti Smith’s “outside of society/is where I want to be” ) via hard drugs, onstage self-harm, and other extremes, is cancelled out by a middle-aged man’s feeling that  such anti-heroics were misguided and futile. All a bit silly.  Like a man who’s fallen out of love but can’t leave the relationship, Haines sees through the myth but is unable to move on.  So he’ll keep on picking at and picking on rock history; he bickers with it, parrots back what it said in an arch mocking tone.


Posted by SIMON REYNOLDS at 7:47 AM No comments: 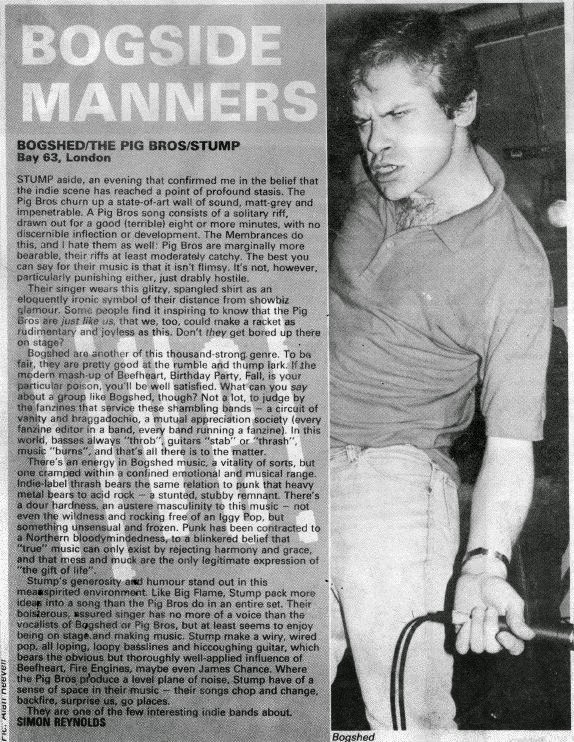 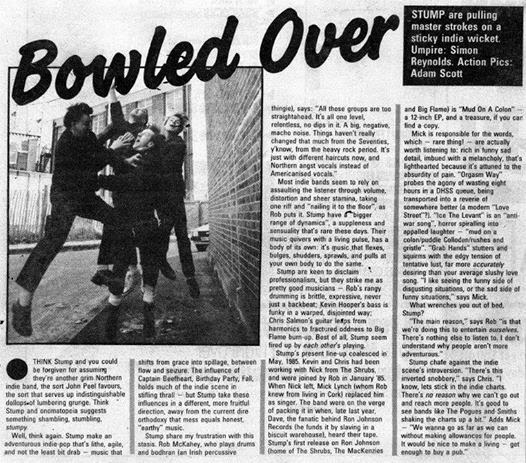 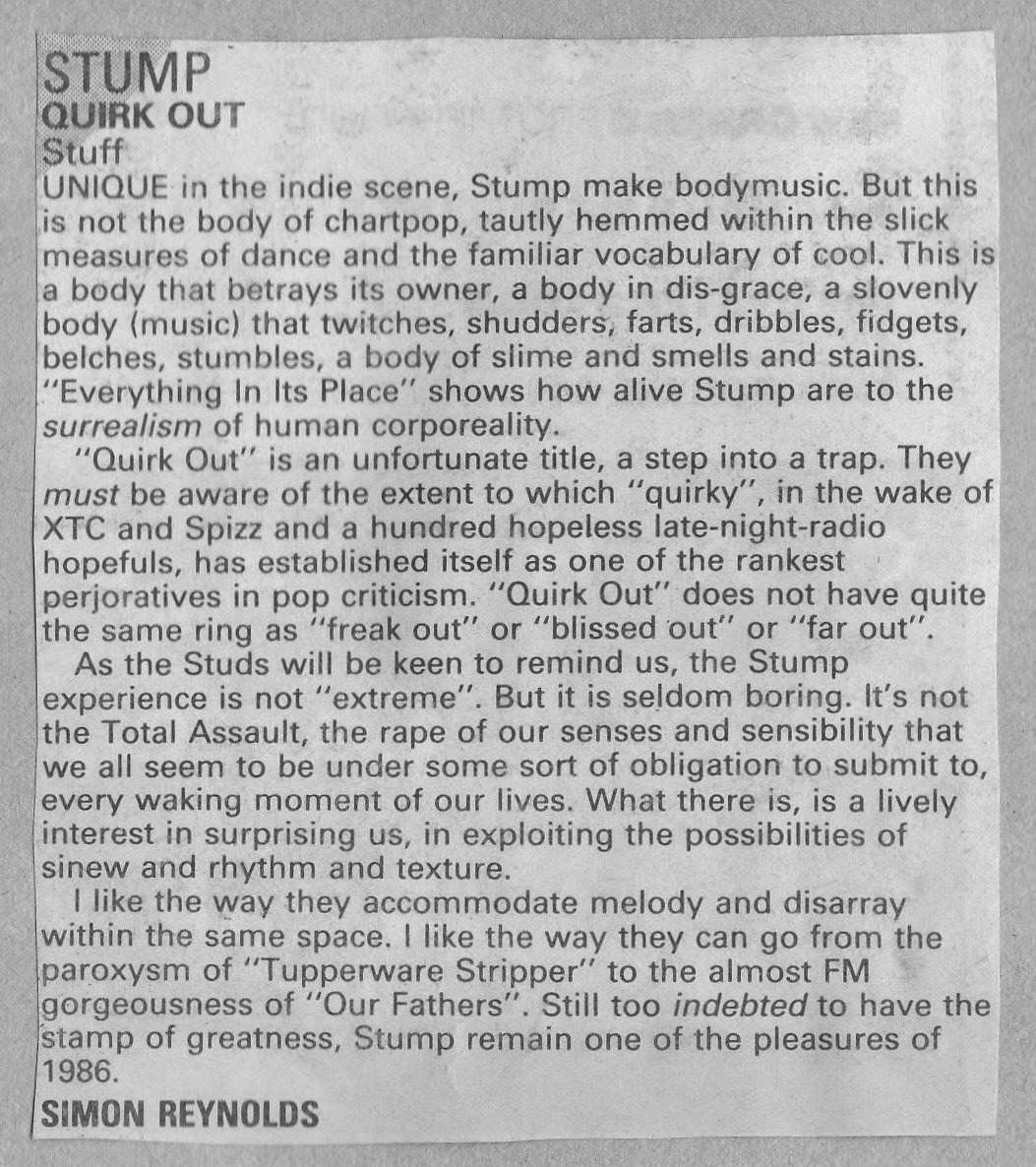 Posted by SIMON REYNOLDS at 7:37 AM No comments: