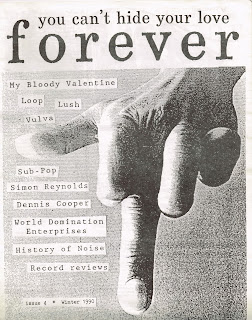 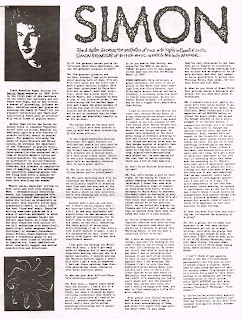 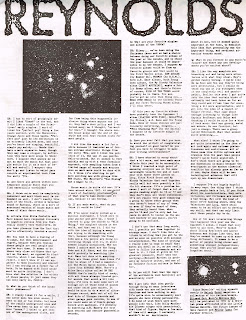 Posted by SIMON REYNOLDS at 11:23 AM No comments:

In recent years there’s been a veritable boom for “outsider electronics”: the reissue, or in some cases first-time release, of recordings by ultra-obscure composers. Active during the 1950s, ‘60s, and ‘70s, these forgotten pioneers of synthesizer and tape-based music were either attached only loosely to music institutions or operated as lone-rangers with neither funding nor much hope of finding an audience.  U.S. label Creel Pone  built up a cult following through its now 100-plus series of CD-Rs that immaculately reproduce in miniature the cover art, labels and even insert material of the original out-of-print LPs.  In Britain, Paradigm Discs unearthed marvels  of musique concrete and text-sound by neglected figures like Trevor Wishart and Lily Greenham, while Trunk Records salvaged works by mavericks like Desmond Leslie, Basil Kirchin, and Tristram Cary.  Both U.K. labels have archived the extracurricular activities of key members of the BBC Radiophonic Workshop, most notably with Paradigm’s  Oramics, a double-CD survey of the oeuvre of Daphne Oram.

Oramics  came out in 2007, four years after the composer’s death. Subsequently a massive cache of unreleased Oram came into the custodianship of  Goldsmiths College. The first siftings from this massive motherlode (over 400 tapes!) are now being released via a new vintage-electronics imprint, Young Americans. The Oram Tapes: Volume One  is available as a deluxe vinyl set (four discs cut at 45 rpm for supreme sound quality) and, soon,  as a double-CD.   Two-and-a-half-hours long and 46 tracks wide,  this dense wodge of experimental sound  is a motley lot to digest even for  obsessive fans of this sort of thing like myself.  Disorientation is intensified further by the dearth of background about  the pieces:  few are dated, little is known about the techniques employed to make particular tracks, and it’s not clear if they are finished or early drafts, complete in themselves or components of larger assemblages.

The most realized-seeming, self-sufficient and imposing works here belong to a series (well, apparent series) of relatively long tracks named after places or institutions: titles like “Eton” and  “Manchester 2”. “London University” (1968), takes what appear to be eavesdropped snatches of conversation and whisks them into a meringue of phonemes.  “Oxford” seems not so much composed as decomposed: forms sliding into formlessness,  a  twilight half-life of mossy, sunken-roofed decreptitude.  At the other extreme are super-short pieces that sometimes come across like Oram has invented a new instrument (on “Wool”, a  futuristic version of the dulcimer) but can’t quite think what to do with it.

The most endearing of the miniatures here are Oram’s pieces for commercials. “Anacin Components” appears to be an audio proposal or first draft, with Oram first explaining and then demonstrating a set of sounds designed to evoke toothache, migraine and  a snuffly, catarrh-thick cold.

Part of the romance of this breed of  lost experimentalists relates to their struggle to create in the face of financial precariousness. Most, like Oram, subsidised their grand long-term projects with hackwork: jingles and sound effects for adverts and industrial films, scores for  horror or exploitation movies , LPs of  library music  or jaunty rhythm-patterns for  children’s  Movement & Dance classes.  America has its own electronic outsider breed: characters like Warner Jepson, Todd Dockstader and Raymond Scott, whose output also alternated between arty (ballet score commissions) and functional (Scott’s Soothing Sounds For Babies LPs).

But there’s something particularly appealing about the British figures: just the idea of them operating in twitchy-curtained suburbia or out in the  leafy countryside (Oram’s studio  in Kent was originally an oast-house, a building used for the drying of hops). Listening to music by Oram or the other Radiophonic mainstays,  you can’t help forming mental images in black-and-white, like a movie made at Ealing or Elstree.

The Oram Tapes plays up this quintessential Englishness by including several tracks that feature Oram’s posh and proper voice.  Introducing one piece with “these pure tones are based on the Balmer Sequence of frequencies for Hydrogen as seen on the spectroscope”, she sounds like a chemistry teacher in a St Trinians film.  Another new reissue in this field, F.C. Judd’s Electronics Without Tears, uses the same ploy to play up the charming quaintness. Unlike the matronly Oram, Fred Judd speaks with the stilted, respectable-aspiring enunciation of Fred Kite, the trade unionist played by Peter Sellers in I’m All Right Jack (1959), except that instead of talking about collective bargaining and the Soviet Union’s glorious achievements , he’s discussing the technicalities of musique concrete.  The last track on Electronics Without Tears has the East London family man signing off with a “cheery bye”.

In the ‘50s and early ‘60s, the community of enthusiasts for electronic music in Britain was small.  Oram and Judd knew each other and corresponded about their pipe-dreams:  her Oramics system  of “drawn sound” for converting visual data (graphs, information etched onto film) into audio, and Judd’s Chromasonics  technology for converting sound into visuals.  Both had similar introductions to the world of electronic sound. Aged only 17, Oram joined the BBC as an engineer in 1943, during a wartime period when women were able to infiltrate professions traditionally regarded as masculine. Judd developed his interest in sound while serving in the RAF Coastal Command as an engineer working with radar equipment.

Despite these similarities, Oram and Judd  represented different English “types”. She was a syncretist and seeker whose interests in the arcane possibilities of sound (for healing and psychological integration) took off into a heady-verging-on-cranky realm where science and philosophy merged with mysticism and the paranormal. Judd was in the mold of the English hobbyist , the sort of pragmatic, phlegmatic bloke that James May might recruit to his “Make Things and Get Excited” campaign. In his Woodford home,  Judd cobbled together all manner of electro-sonic contraptions, including personal prototypes for the synthesizer and the drum machine.  He made and released music sporadically through the Sixties: 3 EPs of electronic ditties via his own record company Castle (later gathered together as the 1970 LP Electronic Age for the library label Studio G), plus the score for the sci-fi TV puppet show Space Patrol.  But more of Judd’s energy was dedicated to propagating the techniques of electronic music via articles in the magazine Amateur Tape Recording, which he edited for four years, and no less than eleven books.

The title Electronics Without Tears sounds like a guide and the album is appropriately book-ended with “here’s how to do-it-yourself”  voice-overs.  The opener “China Bowl” is Judd demonstrating all the things that can be done with a sound “produced by striking a china bowl”, such as playing it backwards and slicing-and-splicing it into different sound-shapes. Penultimate track “Musique Concrete Is Fascinating…” displays a composition that Judd sourced entirely from that single original ceramic chime: a shimmering, quivering palace of gelatin strands. Overall, Judd’s work is more dinky-sounding and tuneful than the forebodingly abstract Oram tracks. Pieces like “Tempo Tune” recall British studio wizards like Joe “Telstar” Meek or suggest computer game music if computer games had been invented in the age of the Lyons’s Wimpy Bar. But  there’s eerie ‘n’ avant stuff too, like the percussive trio of “Moving Pieces”, “Sprockets” and “Voltage Control 2”, which sound like regiments of Perspex-limbed robots on the march and stunningly anticipate 1990s minimal techno.

Most of Judd’s master tapes were lost after his death in 1992, which holds out the tantalizing if tragically unlikely possibility that somewhere out there lurks a treasure trove on the scale of the Oram archive.  This is what boggles the minds of obsessive fans of early electronica: so much of this stuff was recorded in the decades immediately following World War Two, and while the recent reissue boom has made unmanageable amounts of it available again, it’s just a fraction of what was made.

Some of the music on The Oram Tapes and Electronics Without Tears enchants because it’s so dated, so evocatively era-bound. Other pieces could jostle convincingly alongside contemporary analogue synth action by artists like Ekoplekz or Keith Fullerton Whitman.  The fragmented brevity — splinters of textures, spores of inspiration that never fully germinate—actually makes it more appealing to post-techno listeners accustomed to tracks that are about sound-design and repetition but don’t really go anywhere in terms of structural development.  These shards of  sound made for lowly functional purposes are more congenial to ADD-generation ears than the lofty-minded long-form works composed by the electro-acoustic  maestros of Europe during the same period.

Despite their numerous attempts to find it, Judd and Oram never received the investment support to enable them to  realise fully their ambitions: the  attention and acclaim has sadly been mostly posthumous.   The pathos that hangs over these frustrated careers adds to their prophet-without-honour allure: as with so much reissue archaeology, there’s a pleasure in the idea of rectifying historical injustice.  The backstory has become an indispensable element of the listening experience for this kind of music. Indeed so strong is the niche demand for “lost visionaries, rediscovered” that recently there’s been a spate of imaginary ones.

Like  Ursula Bogner, a rough German equivalent to Oram: allegedly a pharmacist/ home-maker who built her own studio, in reality an extended jape by the electronic musician Jan Jelinek that resulted in superb records like the recent  Sonne = Black Box.  The latter came complete with a learned-looking journal of articles about the composer, illustrated with film stills, filing cards, and sundry Bogner ephemera.  Other hilarious and highly listenable audio-fictions include 2010’s Electronic Music in the Classroom by D.D. Denham, purportedly a compilation of  music concrete made by schoolchildren in the 1970s, and last year’s Endless House, supposedly synth music from a 1973 arts-lab that flourished briefly in Czechoslovakia.

It’s gotten so you have be really careful now. When the folks at Public Information told me their next project after Judd involved trippy “electronics for dance” made by a German émigré to the UK who ran a 1960s dance commune and was a devoted naturist, I smelled a rat. His name?  Ernest Berk. They swear he’s for real.
Posted by SIMON REYNOLDS at 11:38 PM No comments: