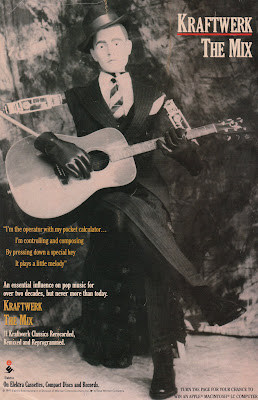 During the last decade, Kraftwerk have been absent but omnipresent. You can hear their ghostly presence in house and techno, in the lovelorn electro of New Order and the inorganic sound-palatte of industrial disco. Rap groups don't cite or sample them so much these days, but in the early Eighties Kraftwerk were as crucial as James Brown. Long before Afrika Bambatta's JB collaboration "Unity", the affinity between "Sex Machine" and "Man Machine" was obvious (the arid, arduous pursuit of bliss-through-monotony). More outlandishly, Kraftwerk were a huge influence on the hymnal mantras of Spacemen 3's Playing With Fire.
Then again, Kraftwerk always namechecked the Stooges/MC5/Suicide/Velvets axis as their taste in rock).

But for a group whose image is of a sound-factory manned by technocrats who devoutly believe arbeit macht frei, Kraftwerk themselves have been curiously unproductive. Since 1981's Computer World, all that's come off the Kling Klang assembly line has been the "Tour de France" 12 inch and 1986's not-major Electric Cafe LP. A few months ago, a "new" Kraftwerk album
was released in the States, with little fanfare. The Mix (Elektra)
was a retrospective, but it didn't embalm its 11 "classic tracks" in their original period charm, and it didn't come complete with a hefty,hagiographical booklet (c.f. James Brown's Star Time box). This was Kraftwerk as living legacy. The songs have been drastically overhauled, the melodic arrangements stripped down and welded to contemporary rhythmic chassis (emphasising both the present's debt to Kraftwerk's futurism, and the group's right to compete in today's
b.p.m. marketplace). "Durability is a central concept in art," K-werk leader Ralf Hutter has proclaimed. "Our sounds and programmes are immortal. Thanks to the computer someone else will be able to continue what we are doing."

Soon Kraftwerk will be here in (impersonal)person, playing their first NYC show in ten years at the Beacon Theatre on September 20.* I caught them in London a few months back, and it was a strange experience. The crowd was a weird mix of fashion-conscious, post-acid house ravers plus Kraftwerk's original nerdish constituency, traditionally known by the shorthand epithet "physics student". Weirder still was the fervour and affection with which the Teutonic technocrats were receieved, like homecoming heroes. Live, Kraftwerk compensate for their static sobriety and the inherent unphysicality of computer-based music, with a spectacular stage set. Their banks of consoles are fronted by fluorescent light-tubes,like the bars of an electric fire; there are back-projected films (b/w footage of cyclists for "Tour de France", freeways for "Autobahn" -literal rather than lateral stuff, you dig); as the piece de resistance , automated doppelgangers of the band are unveiled for "The Robots", to perform a rather stilted ballet.

Immaculately groomed, dispassionate and perspiration-free, Kraftwerk still transgress most of the precepts of rock'n'roll. But the boys do crack a grin or two during "Pocket Calculator", and even "jam" together, improvising on hand-held mini-synths whose keys each cue a different motif or synth-riff. Sweat-less they may be, but soul-less? No way. Just check the sweeping poignancy of those arrangments (midway between systems music and Brian Wilson, one of their major influences).
Swoon to the obliterating pathos of "Computer Love", with its heart-murmur bassline, swirling synth-constellations and lachrymose lines about looking for "a data date".

Still, anonymity and monumentalism are what Kraftwerk are all about, and personally I welcome a dose of that, as a blessed reprieve from the surfeit of "real music" and "true grit" showered upon us from every corner (from the indie scene to VH1, there's too many human beings round here). "Trans Europe Express" remains their tour de force. With its girder beats and indefatigible pace, its arching synths that
rush over your head in simulation of the Doppler Effect, this track really does evoke the spiritual dimension of industrialism. Kraftwerk stir up nostalgia for the days when we thought technology would liberate us, when we beleived the city of the future would be planned and pristine. Nowadays, we know the city of the future is Mexico City or Bombay). Live, and on The Mix, the track develops into the astonishing "Metal On Metal", a funky iron foundry that puts Einsturzende Neubauten
on the good foot. As Britcrit David Stubbs wrote of Faust, Kraftwerk are just specks on their own landscape. Faceless, flesh-less,and fantastic.


*the US tour was cancelled, which is probably why this piece never ran. When they did finally tour America in 1998, I caught one of their New York dates--truly one of the most amazing shows I've seen.

"The dynamism of the machines, the 'soul' of the machines, has always been a part of our music. Trance always belongs to repetition, and everybody is looking for trance in life--in sex, in the emotional, in pleasure, in parties... So, the machines produce an absolutely perfect trance"--Ralf Hutter

"The mechanical universe of Kraftwerk has been cloned or copied in Detroit, Brussels, Milan, Manchester, and even psychedelicized by the delirium of
house music. You can define it as you want: sci-fi music, techno-disco, cybernetic rock. But the term I prefer even so is robot pop. It fits in with our objective--which consists of working without a respite toward the construction of the perfect pop song for the tribes of the global village"-- Ralf Hutter
Posted by SIMON REYNOLDS at 12:22 PM