Liner note to the 2019 reissue of Euphoria by Beacon Sound

I first got to know Insides as the precursor group Earwig and through its parallel print-form entity Rapture, an ideas-explosion of a zine that served as the theory to Earwig’s practice. Released in 1992, Under My Skin I Am Laughing, the group’s one-and-only album, struck me as full of gawky promise. So I made the reviewer’s gamble (second-nature to the Brit-crit in those days, admittedly) of  hyping it as “one of the debuts of the year”. That bet paid off and then some: a year later, the reconfigured and renamed group delivered a second debut in the form of Euphoria, a pristine dream of a record that surpassed my wildest anticipations.

The interview with Kirsty and Julian below took place on Monday 27th September 1993, at the Stockpot Restaurant on King’s Road,  London. I can be that precise because a few years ago I found a sheaf of old Filofax pages in a box: the very next day I interviewed Aphex Twin and later that week made contact with the ambient jungle labels Moving Shadow and Reinforced –making for almost a clean sweep of future-minded early Nineties U.K. pop! 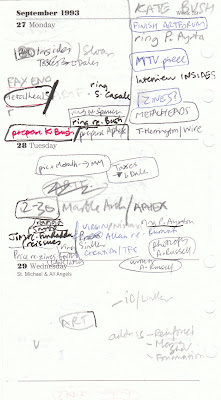 The feature appeared about six weeks later in Melody Maker and seems to be the very first time I used the term “post-rock”, although no one noticed. Seven months later, I would include Insides in the first dedicated overview of post-rock,  alongside outfits like Seefeel, Disco Inferno, Main, and Techno Animal. That was in The Wire magazine and this time people did notice.

Those two years 1993-94 were an incredibly exciting time in British left-field music. All kinds of new directions seemed to be opening up, with the more experimentally-minded guitar-centric groups in the independent sector starting to grapple with the possibilities of sampling, sequencers, programmed rhythm and digital audio workstations like Cubase, in many cases as a result of having their ears piqued by the texturology and groove science of the more advanced units in hip hop and techno (in particular that man Aphex Twin again).  This emerging landscape of new ideas and approaches was really too diverse to be  shepherded into a movement, but - being a journalist and all - I felt that marshalling things under a single banner was a good strategic move: strength in numbers that would commandeer space and focus attention where it needed to go. Hence “post-rock” – always intended as an open-ended category, a space of possibility rather than a codified genre. So much for that, eh?

Of all the reluctantly rounded-up suspects, Insides fit the term the least. Their bearings were way more  pop than rock. And that’s how to hear Euphoria: as an askew pop record,  one that really belongs in the same universe as a Dido rather than a Mogwai.  As with some of their fellow travelers of that time – Disco Inferno would probably be the closest counterpart, with their shared attachment to song form and legible emotions, their nervous delicacy – Insides’s music shimmers and  tingles with the tantalizing promise of a different direction that U.K. pop  could have gone: future-facing and fresh, rather than the nostalgic regurgitation and stale retrogressions of Britpop that actually ensued.  Those who heard the record back in ’93 may not be able to escape their own wistful hankerings for the early Nineties and its lost promise, it’s true. But if you’re listening to Euphoria for the first time, I think you will be surprised how modern it still sounds in 2019, an astonishing twenty-six years after it came out.

Kirsty Yates and Julian Tardo used to be 2/3 of Earwig, whose '92
LP Under My Skin I Am Laughing was correctly hailed (by me) as
"one of the debuts of the year" . Now the pair are 100% of Insides
(they changed the name 'cos they got sick of people harping on about
how silly and diminuitive 'Earwig' was). Having signed to 4AD,
they're about to release their second 'debut', entitled Euphoria,
and this time I correctly hail it as one of the albums of the year.

Where Under My Skin was lo-budget and homespun, Euphoria
has 4AD's customary gloss: it's easy glistening music, somewhere
between Prefab Sprout's oblique elegance and the mosaic intricacy of
Papa Sprain. But if Insides have any real peers, they belong in that
lo-fi but non-Luddite zone of post-rock/post-techno experimentalism
that encompasses Disco Inferno, Seefeel, Aphex et al. Basically,
Insides make delectable non-retro pop (as opposed to the delectable
retro pop of, say, Teenage Fanclub). But all that should really
concern you is the word 'delectable'.

Julian (his official nomenclature on the sleeve is J. Serge
Tardo, but fuck that) and Kirsty aren't just a duo, they're a
couple too. For a while last year, they weren't: Euphoria is in
part the document of the emotional carnage, placing it in the
illustrious tradition of inter-band heartbreak albums that includes
Fleetwood Mac's Rumours and Richard & Linda Thompson's Shoot Out
The Lights. The pair met at university in Brighton, where they
currently subsist on the dole. They lead a hermit-like existence,
having little reason to venture outside their flat/arts-lab, where
they make music and films. All their "gizmos" are at one end of the
room, and the TV is at the other: they're creative all day, then,
says Kirsty, "come 6 o'clock it's television lockdown".

Although Brighton is a veritable rock'n'roll city (inhabitants
include Primal Scream, some of Huggy Bear, Coco Steel & Lovebomb,
and, erm, Norman Cook), Insides say they have little in the way of a
supportive milieu of arty-minded kindred spirits, apart from some
friends who are loosely connected to the Riot Grrrl thang. Then
again, Insides aren't exactly rock'n'roll. Like the post-rock/post-
rave ambient units, Insides' music is built up through layers rather
than jamming: it's a 'musaic' of sequenced motifs, over which Kirsty
whispers her unsettling lyrics. Most of their sound-web is sampled
(from self-generated noises as opposed to other people's records)
then played on a keyboard.

"There's nothing intrinsically wrong with guitars," Kirsty says
of their non-rock methodology. "It's guitar players that are the
problem."

As it happens, Julian is a very able guitarist: his tantalising
Vini Reilly-esque filigree is one of the most exquisitely poignant
threads in the Insides tapestry. I reckon Mary Margaret O'Hara
should give Michael Brooks the heave-ho and hire Julian to play on
her bloody-long-time a'comin' sequel to Miss America. Julian is
available for session work, but interested parties beware, he says
the greatest influence on his playing is Kraftwerk!

Another non-rock aspect to Insides is their lack of a driving
backbeat: their programmed drums are more like decorative threads,
embroidery that stitches all the layers together. Are they never
tempted to ditch the beat completely, go totally vaporous?

"We're working on something now that hasn't got a beat," says
Julian. "Almost a classical composition. But it takes a while to
disentangle yourself from the old way of doing things. Earwig had
all these askew, off-centre rhythms, but I quite like doing
something obvious every so often, like this new song that's got a
fat disco beat. We're really influenced by disco, Sister Sledge and
Chic. With Cubase, the progamme we write songs on, I can just stick
a weird beat like 7/8 in really easily, so it loses its novelty.
It's not really that avant-garde cos it's within anyone's reach."

"Anyway, we're not interested in being experimental or
difficult," says Kirsty with some emphasis. "I see 'Euphoria' as
this Astrid Gilberto thing, or even like the Bjork album: something
pleasant, something nice."

That said, Insides could never be soothing mood-muzak, because
Kirsty's tenterhook singing and barbed words are too edgy (it's also
why they don't really fit with the ambient thing). "Darling Effect"
has a real sit-up-and-listen opening: "I hate lovers", declares
Kirsty, "I hate the way they go to the bathroom in shifts after they
fuck". It's the lonely lament of someone whose flatmates have
become a couple, consigning him/her to perpetual gooseberry status.

Insides make 'nervous systems music': while their techniques
and textures parallel the lulling hypno-loops of systems composers
like Philip Glass and Michael Nyman, their aura is agitated, and
that's very much down to Kirsty, a rather nervous character.

"I suppose I am," she admits. "Although sometimes my voice
shakes in the studio cos I'm really hungry! But sometimes I can't
believe that we get onstage, without drinking. After playing at the
ICA, I was sick the next morning - delayed nerves. I don't think
I'm chronically nervous, I do confront it. We're not reclusive cos
we're afraid of people, although I don't like walking past crowds. I
don't fear living or anything like that."

I tell her how the imagery in "Bent Double" of close friends
rubbing her back reminded of how angst-queen PJ Harvey has to take a
stress-management therapist on tour.

"We could do with a stress-therapist. Julian's got this lump on
his neck, where the muscles are knotted with trapped tension."

The self-consciousness of Kirsty's vinyl persona seems vaguely
connected to Insides' intellectual self-consciousness. Julian used
to put out the excellent, hyper-theoretical fanzine Rapture,
before deciding to concentrate on making music rather than
complaining about the state-of-rock.

"Although we talk about ideas a lot, it doesn't affect the
music," he says. "We're not one of those bands who consciously
assemble themselves or who have policy decisions like 'we want to
get into dub'. We don't talk about what we want to sound like, it's
more a checklist of what we DON'T want to sound like."

I used to believe that the best music was made by instinct-
driven, non-reflective types; that British hyper-awareness was a
curse. But right now, the most interesting music is coming from
veritable brainboxes, like Stereolab - bands who have bags of ideas,
but don't inevitably make premeditated, stillborn music. The main
effect of Insides' cerebral tendencies seems to have been that it's
allowed them to think their way through the NOISE = INTENSITY mind-
fix ("noise is so white male middle class - go work in a factory and
you'll find out there's nothing radical about noise", argues Kirsty)
and embrace the idea that quiet, gentle music can be even more
unnerving. Not only are they unabashed Prefab fans, they also give
their songs working titles like "Don Henley" (the song in question,
"Darling Effect" reminded them of the classic "Boys Of Summer") and
"Chris Rea". One song's official title on the album is actually
"Carly Simon"! So are Insides making futuristic soft-rock?

"We have this theory," says Julian. "that if you work on a song
too long, it'll either turn 'brown' (the colour, like a recipe gone
wrong) or turn into Fleetwood Mac. All roads lead to Fleetwood Mac,
so you should step off just before you get there!"

So you don't actually want to have a totally emollient effect
on the listener?

"I'd like them to swoon first, and then throw up! Or feel that
rising, heady sensation you get when they give you anaesthetic at
the dentists, and then the next minute you realise you're covered in
blood."

Insides, Kirsty says, want to rescue songcraft from "bands like
Suede and Radiohead who believe that 70's style songwriting is what
it's all about". They're avant-tunesmiths. They're not interested
in extremism, because too many full-on noise records are initially
impressive but somehow you never return to them.

"That's what I look for in music," says Julian. "That it draws
you back to it again and again."

"Not exactly, but it should make you gag to hear it again and
again, but never get any closer to understanding why you like it".

Aside from the phrases "All roads lead to Fleetwood Mac" and "That Don Henley factor!," this is an awesome article.

I actually listened to Euphoria the other and I'm pleased to say it still sounds good, unlike Don flipping Henley!

I actually listened to Euphoria the other day and I'm pleased to say it still sounds good unlike Don flipping Henley.