forgive us our synths

Synthesisers in pop go back much further than you might think. Prog rockers loved ‘em: ELP’s Keith Emerson let rip many a Moog solo, Rick Wakeman from Yes performed behind a vast bank of keyboards, and German bands such as Tangerine Dream sketched the face of the cosmos with Mellotrons and Arps. At the other end of the spectrum, Stevie Wonder pioneered the use of electronics in R&B (with tech guidance from two white geeks who went by the name Tonto’s Expanding Head Band). And the blurts of abstract noise from Brian Eno’s EMS VCS3  on those first two Roxy Music albums turned a generation onto the avant-pop potential of synths.

For many young musicians who’d been mobilized by punk’s do-it-yourself rallying cry, the near-simultaneous impact of these two singles was revolutionary: suddenly the trad-rock format of guitars, bass, and drums seemed archaic,  exhausted. By happy coincidence, just at this moment, synths--hitherto the preserve of wealthy prog-rockers--got an awful lot more affordable, portable, and user-friendly. The new breed of synths like the Wasp resembled an orchestra in a box. Which is one reason synthpop was full of duos, partnerships that split the roles neatly between singer/lyricist and composer/machine-operator: Soft Cell, Eurythmics, DAF, Pet Shop Boys, Erasure, et al.  Synths meant you simply didn’t need a whole band of instrumentalists. This became even more the case when programmable drum machines like the Linn started to come online at the end of the Seventies. That said, two notable exceptions to the duo norm also happen to be probably the most famous synthpop outfits of all time: The Human League and Depeche Mode.

From the North-of-England industrial city of Sheffield,  The Human League started out as a quartet consisting of two synth nerds (Ian Craig Marsh, Martyn Ware), a singer with a striking lopsided hair style covering half his face (Phil Oakey), and a fellow who didn’t contribute anything musically but projected Pop Art-influenced slides behind the band (Adrian Wright). In 1979, David Bowie proclaimed The Human League to be the sound of the future. But after two modest-selling albums of almost-pop, the group split acrimoniously.

Everyone assumed the synth boffins, who’d formed a new group called Heaven 17, would make it, and that the vocalist and Director of Visuals were the talent-free rump doomed to obscurity. But in an inspired move, Oakey recruited two teenagers, Joanne Catherall and Susanne Sulley, as backing singers after spotting them at a Sheffield nightclub. With the “ordinary girl” charm of their fallible voices and amateurish dance moves, Catherall and Sulley humanized the League for the first time. Brunette and blonde respectively, the girls’ presence created an Abba-like visual chemistry while also banishing the group’s geeky science-student image, something further enhanced when Oakey stopped writing songs inspired by Philip K. Dick and black holes and started singing about L.O.V.E.

The second masterstroke in the reinvention of the League came when they found their own Giorgio Moroder in producer Martin Rushent, a bearded music-biz veteran who combined arrangement skills acquired through working for the likes of Shirley Bassey with a gear-head’s passion for the latest music technology. The result was a perfect sequence of timeless hits--“The Sound of the Crowd,” “Love Action,” “Open Your Heart,” “Don’t You Want Me”-- that forever demolished the synthesiser’s image as a cold and soul-less instrument. “Don’t You Want Me” reached Number One on both sides of the Atlantic, boosted by its classic promo clip, which, Jean-Luc Godard style, depicted the band making its own video.

Compared to Human League’s postmodern wit, or to the kinky noir imagery of Soft Cell, Depeche Mode early on seemed like the lightweight option. Dinky ditties such as  “New Life” and “Just Can’t Get Enough” seemed like the very definition of disposably innocuous pop. When their main songwriter Vince Clarke quit to form Yazoo, people assumed Depeche would be forgotten within a year. But the group had originally signed to pioneering independent label Mute because they admired its roster of innovators like Fad Gadget and DAF. Depeche had their own aspirations to depth and edge. Stepping into Clarke’s shoes as chief writer, Martin Gore started to explore the dark and deviant precincts of human life. He split up with his prim Christian girlfriend and spent time in Berlin, checking out everything from sleazy bondage clubs to performances by metal-bashing avant-primitivists Einsturzende Neubauten.

Depeche Mode also admired Neubauten’s UK counterparts, Test Dept, a  gang of left-wing skinheads whose clangorous steel symphonies celebrated the collective strength and muscular might of the working class, even as their physical skills were being rendered obsolete by the decline of heavy industry. Borrowing Test Dept’s Constructivist  imagery, Depeche titled their 1983 album Construction Time Again and put a hammer on the front cover, a tribute to the Nobility of Labor that echoed the Soviet hammer-and-sickle.  “Everything Counts,” the first single off the album, featured a desolate woodwind-like refrain that sounded like a socialist wringing his hands upon learning that Thatcher and Reagan have been re-elected, while the lyrics critiqued Eighties enterprise culture: “the grabbing hands grab all they can… it’s a competitive world.”


Full of metal-on-metal percussion and sampled noises, Depeche’s next hit singles “People Are People” and “Master and Servant” took Neubauten and Test Dept’s ideas into the pop mainstream. Lyrically informed by Gore’s forays through Berlin’s S&M underworld, “Master and Servant”  connected bedroom and boardroom to make a witty personal-is-political allegory about power games:“it’s a lot like life,” so “forget all about equality.” Proceeding through a check-list of Weighty Subjects with an almost methodical determination, Depeche then tackled religion on 1984’s “Blasphemous Rumours,” which impudently suggested that “God’s got a sick sense of humor.”

In the late Eighties, Depeche Mode’s music got ever more sophisticated and melodically haunting with albums like Black Celebration and Music For the Masses. They scored their first US hits with “Personal Jesus” and “Enjoy the Silence” and established a reputation as a surprisingly formidable live act. Depeche’s arena tours of America took in larger and larger audiences, peaking with a 1988 show at the Pasadena Rose Bowl witnessed by seventy thousand ecstatic fans.

By this point, Depeche Mode were virtually rock stars, second only to U2 as a big-in-America band from the British Isles. Depeche’s music got rockier too. As with other synth-pioneers such as Human League, Soft Cell, and Eurythmics (all of whom they’d outlasted commercially), at a certain point the only way forward for Depeche was to incorporate non-synthetic instrumental textures. All this culminated in the bluesy grind of 1993’s “I Feel You.”

Around this time, singer Dave Gahan underwent a bizarre transformation. Dumping his wife and kids, he moved to Los Angeles and got into deeply into tattoos, facial hair, and drugs. Suicide attempts and drug overdoses followed. For  Depeche’s original American following, all this rockist nonsense must have been deeply puzzling.  After all, for sensitive and maladjusted types, a huge part of the appeal of being into all that “faggy” music by eyeliner-wearing Anglo fops was that it served as a potent form of  dissidence: a way of defining yourself against the standard high-school fare of Motley Crue and Ozzy. But here was formerly fresh-faced Gahan mutating into… well, Dave Navarro, basically. The horror, the horror…

Grunge made guitars dominant during most of the Nineties. Eighties synthpop was either completely forgotten or recalled only as a joke--all those  preposterous New Romantic haircuts and fey eyeliner boys playing one-finger synth-melodies. Then, slowly, the contempt turned to amused affection, and by the eve of the new millennium, a full-blown early Eighties revival got rolling. It began as a retro-ironic fad within the techno world, with groups like Adult. and Les Rhythmes Digitales, whose "Hey You What's That Sound"  came with a video that parodied the charmingly clumsy graphic effects that seemed so futuristic in 1983.


Soon scenes blossomed in the hipsterlands of Brooklyn, Berlin, and other major cities across America and Europe.  Clubbers dressed in a mish-mash of recycled Eighties New Wave style signifiers--asymetrical haircuts, ruffs, skinny ties worn over collar-less T-shirts, punky-looking studded belts and wristbands, little cloth caps. The soundtrack mixed classics and obscurities from the original era with new tracks by modern artists like Miss Kittin and Vitalic,  who studiously deployed vintage analog synth sounds, vocoderized cyborg-vocals, 16th-note basslines, and archly inflexible drum machine beats.  Known as “electroclash” or “nu-wave”, the revival was the big hype of 2002, but neither of the scene’s most touted bands, Fischerspooner and The Faint, managed to penetrate the mainstream, and soon hipsters moved on to pillaging another seam of retro (late Seventies postpunk). What few noticed was that Eighties synthpop had already resurfaced on the charts, in a seemingly most unlikely location--nu-metal. Multi-platinum selling  Linkin Park roar at the choruses, sure, but their verses drip with the wan and slightly wussy melancholy of prime-era Depeche Mode, suggesting that the band was born at precisely that moment in the early Nineties when MTV would play “Enjoy the Silence” back with ballads by Queensryche and Metallica. 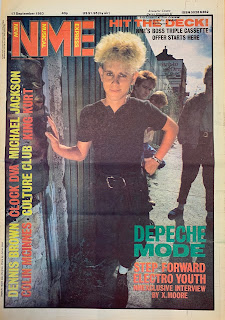 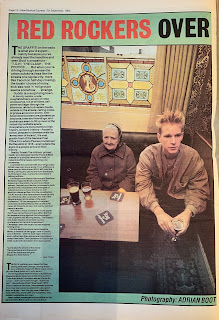 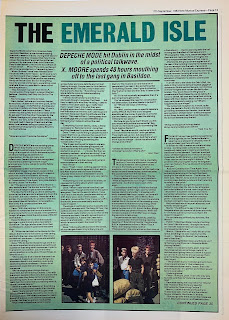 Posted by SIMON REYNOLDS at 6:18 PM

From your next book, I hope? Or a contribution to someone else's?

By the way, I'd love to get a book length treatment from you on the history of Goth as an offshoot of Postpunk. From your chapter on Goth in Rip It Up And Start Again, it doesn't seem like you don't have much love for the genre. But as a huge fan of your books, I think you are the best qualified to write such a history. Just sayin'.

Good stuff. Out of curiosity, why is New Order omitted? Space? In "Rip It Up" you drew a link between "I Feel Love" and their early synth experiments and singles circa 82/83, and no one borrowed (stole) more from Kraftwerk than they did, so I assume they're left out because you classify them differently. Are they too hybrid? One foot still planted in the rock swamp, despite the synths?

I don't object. They don't quite belong. Their combination of bumbling yet inspired amateurism and the emotional brutality of their lyrics sets them apart from the Depeche Leagues.

(Not that it matters, and I'm sorry if this is a trivial comment, I just find it so much more pleasant to think about than Brexpeachment.)

Is this for your next book? Looking forward to another great one from you.