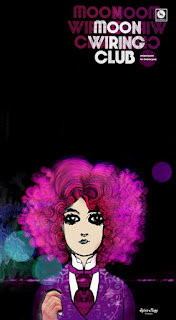 It's always a tricky moment when a genre achieves definition--its constellation of reference points mapped out, its repertoire of tricks codified. For that's when being "generic" becomes a possibility. Then again, if a genre's got a lot going for it, what exactly is the problem?  The bustle of new recruits just adds to the excitement, as everyone from doom metal fiends to free folk freaks can attest. The more, the merrier.

Or in the case of Moon Wiring Club, "the more, the spookier"--the genre in question being hauntology. Ian Hodgson, the figure behind MWC, is no bandwagon-hopping neophyte, however. Despite the uncanny parallels with Ghost Box--not just shared preoccupations with  horror, children's television,  wyrd pastoralism, maverick electronics, but the creatin of a Belbury-like imaginary town called Clinkskell--Hodgson has been exploring this area for several years. An Audience of Deco Eyes, MWC's debut, evolved out of what was originally intended to be "a peculiar children's book," Strange Reports from a Northern Village.

Like Ghost Box and Mordant Music, MWC utilizes a lot of library music and pulp soundtrack motifs. But the music's construction and feel is more beat-driven and loop-based:. Certain tracks suggest trip hop if its sample-palette didn't draw on jazz but the incidental music in The Prisoner.  "Mademoiselle Marionette" could almost rock a dancefloor, while the reverbed-bass pulse of "Roger's Ghost" recalls 23 Skidoo's blend of dank industrial and hot funk. Alongside these kinetic tracks, there's midtempo contraptions-gone-awry like "The Edwardians Begin to Enjoy Themselves" and gaseous ambience like "Ghost Radio" and "Underground Library". Crusty English voices limn the album, warning about "the treacherous elm" or offering the decimalization-era apology "I've only got… old money". But rather than mere quirky quaintness, the atmosphere conjured is a morbid malaise redolent of Peeping Tom or The Servant, the sense of something grotesque and corrupt lurking within the shrubbery, behind the curtained French windows. With its fidgety intricacy and slow-panning stereophony, Hodgson's audio-montage and sound-design is immaculate throughout, making Art Deco Eyes a bewitching and genuinely disquieting listen. 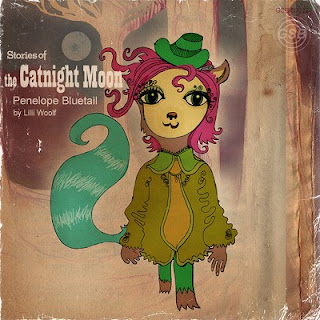 "One thing I've always wanted for my music is for it to appeal to children," says Ian Hodgson of Moon Wiring Club.  "An ideal listening situation would be a family car journey. I think children would like all the voices and oddness.  If you present kids with fun spooky electronic music, then they might grow up wanting to make it themselves, like I did with Radiophonic Workshop." Hodgson's friend and collaborator Jon Brooks, a/k/a The Advisory Circle, goes one better with the debut release for his label Café Kaput, which consists of spooky electronic music actually made by schoolchildren in the 1970s.

Brooks and Hodgson originally met through MySpace.  They  discovered that they were "variations of the same person," according to Hodgson, with a shared passion for vintage Seventies and Eighties TV, not just programmes but the musical soundtracks. Sticking with the scaring kids theme, one particular obsession they share is the Public Information Film--those well-meant but disturbing short films shown on TV in the 1970s to warn children of the dangers of electrical substations or playing on farms. On The Advisory Circle's 2008 album Other Channels, Brooks even created some fake ones, "Frozen Ponds PIF" and "Civil Defense Is Common Sense". 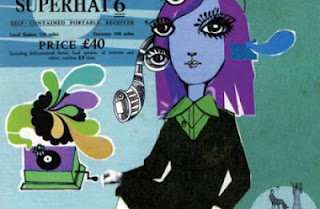 The friendship quickly became an alliance. Brooks has done the mastering for all four of the Moon Wiring Club albums, including the brand-new one A Spare Tabby at The Cat's Wedding, probably Hodgson's best yet. Hodgson, in turn, is doing all the artwork for Café Kaput and designed the label's logo. A full-blown collaboration between Moon Wiring Club and The Advisory Circle is in the pipeline.

The pair are chalk and cheese, though, when it comes to the way they operate musically.  A skilled multi-instrumentalist whose music is "98% hand-played", Brooks makes little use of sampling or computer software. Other Channels and his earlier Advisory Circle release Mind How You Go (reissued this year in expanded, vinyl-only form) revealed Brooks to be one of the contemporary scene's great melodists, with a gift for plush, detailed arrangements.  Hodgson's approach, in contrast, is much more hip hop raw.  Entirely sample-based, Moon Wiring Club is put together using astonishingly rudimentary technology:  Playstation 2  and "a second-hand copy of MTV Music Generator 2 from 2001". 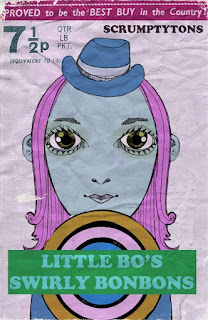 Hodgson turned to this crude set-up after struggling with the software typically used to make electronic dance music. Because he's a long-time games fiend, Hodgson found using a joypad to make music "much faster and more enjoyable" than clicking a mouse.  But it took him a while to work out how to get good results out of Playstation 2. "After months of tinkering, I discovered that it's very good at sequencing short repeated phrases." Instead of looping breakbeats, Hodgson builds up rhythm patterns from single drum hits. Through these wonky beats he then weaves intricate, often heavily echoed basslines. "I'll place the bass melody around the rhythm in a very 'stereo' way. I tend to see it all in my head as a 'cat's cradle'. Then if you add delay to the bass and time it right you get extra little melodies inside this structure...  They sort of bounce and react with each other. Add melody/atmospheres to it and you get another interlocking structure--slightly organic, soggy, bouncy and knackered." 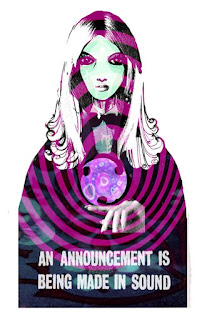 The Moon Wiring Club sound is a bit like trip hop if its "vibe" was sourced not in obscure funk and jazz-fusion records but from the incidental music to The Prisoner, Doctor Who, and The Flumps.  Vocal samples are a huge part of Moon Wiring Club. Always spoken not sung,  always English in origin, they're derived largely from videos and DVDs of long-lost U.K. television shows like Casting the Runes, Raffles, and Ace of Wands. A scholar of "vintage telly", Hodgson can discourse at persuasive length about the superiority of  British theatrical-turned-TV thespians like Julian Glover and Jan Francis over American actors like Harrison Fords or Mary Louise Parkers. He recently dedicated a podcast mix to Seventies voice-over deity and Quiller star Michael Jayston. 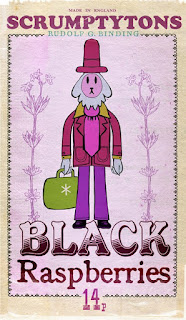 Moon Wiring Club originally evolved out of what was intended to be "a peculiar children's book, Strange Reports from a Northern Village." That project stalled but it did spawn the Blank Workshop website, centered around an imaginary town called Clinksell, which has its own brand of confectionery (Scrumptyton Sweets) and line of fantasy fiction (Moontime Books) .  It lives on also in the distinctive graphic look that Hodgson, a former Fine Art student, wraps around the Moon Wiring Club releases, drawing on influences like Biba's 1920s-into-1970s glamour and the strange exquisiteness of Arthur Rackham's illustrations and Victorian Fairy painters such as Richard Dadd. Moon Wiring Club and Blank Workshop is where all Hodgson's enthusiasms and obsessions converge: "electronic music, Art Deco, and the England of teashops, stately homes, ruined buildings and weird magic." And computer games music. "There is something about the  forced repetition that makes you remember the tunes in a unique way," Hodgson says, adding that in a certain way "Moon Wiring Club is meant to be Edwardian computer game music." 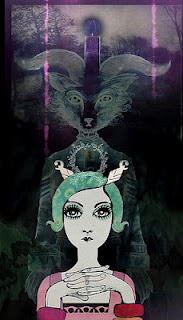 "Still a kid in lots of ways" is how Jon Brooks describes himself. His own journey through music  began "at pre-school age", thanks to his jazz session-musician father.  "Fellow jazzers would come round to record demos or share ideas, and there were always instruments and tape recorders lying about. " Brooks was proficient on a half-size drum kit his dad bought before he even went to infant school. Soon the child prodigy was grappling with guitar, glockenspiel, and keyboards, and messing with tape recorders.  Although his father died when Brooks was only nine, he continued to pursue music, avoiding any formal training but studying music technology and also helping out with the teaching of an A-level class in music0tech.

Perhaps  his early start with music, along with his  later involvement in musical pedagogy, accounts for  why Brooks was so intrigued by Electronic Music in the Classroom,  an ultra-rare recording that was the byproduct of a course implemented at several Home Counties schools in 1975/76 and which he has reissued through his just-launched downloads-only label Café Kaput. Originally released in a miniscule edition of reel-to-reel tapes and cassettes for the parents of the children involved, the record is credited to D.D. Denham, the peripatetic teacher who devised and implemented the course.  But the contents are actually the crème de la crème of the work created by participating children. Now retired, Denham stresses  that "the concepts were always those of the child. I would help quite a bit with technical realisation, in terms of connecting that concept to a sound. But I always explained to them the steps taken in order to achieve the sound.  The children soon picked up various techniques and developed them on their own. So, a little bit of collaboration, but it was more guidance than anything."

Many of the pieces on Electronic Music in the Classroom are disorienting and disquieting, reflecting children's under-acknowledged appetite for the sinister. "Some children would get very spooked by each other's compositions, or sounds," Denham recalls. "Sometimes an oscillator would emit a loud wailing sound and lots of the other children would gather round the instrument like a magnet, rather than run away. Kids actually love being scared and sound, although harmless in this case, can be scary and thrilling!" The reissue comes with the original liner notes, in which Denham recounts some of the quirky inspirations and back stories that the children came up with, from a recurring nightmare about nuns, to the unsettling smell of the air expelled from the church organ, to the ghostly flitting figures of poachers seen from afar after  dusk .

Then there's "The Way The Vicar Smiles", a delirium of drastically warped,  vaguely ecclesiastical sounds (what could be church bells, a choir singing psalms, and so forth).  In the liner notes, "Vicar Smiles" is accurately described its young creators Robert and Luke as "a bit creepy".  "With the benefit of hindsight, the LEA thought we were probably skating a little too close to the middle with that one," recalls Denham. "You couldn't get away with it now. However, the vicar in question disappeared from his work a couple of years later, without so much as a whisper. Make of that what you will." 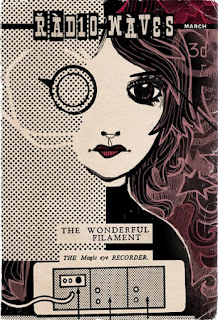 Posted by SIMON REYNOLDS at 4:37 PM