Mantronix don’t quite fit. Hip hop is getting to be more and more of an assault, more and more hyper-compressed and minimal in its search for harder and higher hits. But Mantronix are loosening up their music, bringing in a suppleness and textural luxury. Hip hop daily exceeds new levels of megalomaniac viciousness. But Mantronix are gradually squeezing the SELF out of their music, letting the music stand on its own madness.

Compare what Mantronix are doing with a track that represents some kind of zenith in current hip hop trends--“The Manipulator” by Mixmaster Gee and The Turntable Orchestra (off Electro 14). Here skill on the turntables becomes a twisted, bloated metaphor for omnipotence. The voice shoves itself RIGHT IN YOUR FACE--you can practically feel the spittle, smell the breath. It’s a voice intoxicated with power, quaking with rage.
MC Tee from Mantronix, in comparison, has a refreshingly adolescent voice, almost sweet--words are slurred, there’s the tiniest suggestion of a lisp. “Manipulator” style hip hop is given its impetus by being focused on the tyrannical charisma of the rapper, but with Mantronix the
raps seem almost superfluous. There are several instrumentals. With most hip hop the very sound of the music is a MASSIVE COCK waving about in your face. Mantronix erase every trace of the pelvis, every last ditch of humanism in hip hop. Their music isn’t weighted down by the heaviness of masculinity, but glides, skips, even frisks at times, rather than thuggishly stomping us weaklings underfoot. Mantronix sound disembodied, dislocated, out-of-it. 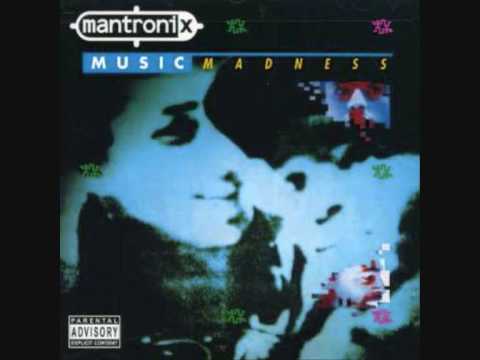 They are far out, a long way from firm ground. Mantronik marshals a host of uprooted fragments and abducted ghosts into a dance. He thieves indiscriminately, without prejudice, enlisting anything from Benny Goodman to The Old Grey Whistle Test theme tune. On “We Control the Dice” they even indulge in self-kleptomania (or perhaps simple thrift is at work), re-using the bass motif from “Bassline”. Their greatest influence, though, is European electropop--the scrubbed, spruce, pristine textures and metronomic precision of Kraftwerk and Martin Rushent’s Human League. While the brainy British bands of the day dedicate themselves to noisy guitars, it’s up to Mantronix (and House music) to uphold the spirit of 1981, to cherish the bass sound and the electronic percussion of “Sound of the Crowd” as a lost future of pop.

They have moments close to wildness-“Big Band B-Boy” commandeers a jungle of percussion--but I prefer it when Mantronix sound stealthy. “Scream,” with its curiously muted delivery of a party-up lyric (the word “scream” is almost whispered) is as eerie as Suicide lullabies like “I Remember” or “Cheree”. The title track has a roaming, furtive sense of space, the phrase “music madness” sampled, stretched and
melted into a series of beautiful belches. Best of all is the closing “Megamix”, in which everything you’ve been listening to for the last half-hour is regurgitated inside out and upside down, flashing before your ears like a drowned, garbled life. Sublime pandemonium.

Music Madness is the kind of music you’d hoped The Art of Noise would go on to make after “Close (to the Edit)”. Fleshless, soulless, faceless and fantastic.

Mantronik does not write Good Songs. He is not an author, but an engineer, an architect. His music is not the expression of his soul, but a product of his expertise. What Mantronik does is construct a terrain, a dance-space in which we can move, float free. Unlike the Rock Song, there’s no atmosphere, no nuances, no resonance, here: instead, simply a shifting of forces, torques, pressures, gradients. Mantronik’s work (and it is work) is neither expressionist nor impressionist--it’s cubist, a matter of geometry, space, speed, primary colours (not the infinite shades and subtle tones of meaning). Populist avant-gardism.

The song is the primary object of Rock Criticism--the work of art as a coherent, whole expression of a whole human being’s vision. Most rock criticism is poor Lit Crit, forever trying to pin down pop to What’s Being Said (whether that’s nuggets of “human truth” or blasts of “social commitment”), forever failing to engage with the materiality of music. A Mantronix track isn’t a song, a finished work but a process, a space capable of endless extension and adaption; a collection of resources to be rearranged and restructured. Hence the six different mixes of “Who Is It?”; hence the closing “Edit” on the last LP Music Madness, in which the whole album is compressed into a volatile six minutes reprise; hence the “Primal Scream Dub” of “Scream”, the fantabulous new single, virtually an entirely new piece of music altogether…

Pop is drowning itself (and in the process drowning us) with “humanity”--from the sickening, hyperbolic “care” of “Let It Be” and “We Are the World” to the firm, all too firm flesh throbbing in “I Want Your Sex”. Swamped by this benign, beige environment, this all-pervading warmth, it’s scarcely possible to feel the shiver down the spine, the sharp shudder of ecstasy:  modern pop just massages you all over, comforts and reassures. Practically every walking minute of our lives we’re condemned to be human, to care for people, to be polite, to be socially concerned. Should’nt our leisure (at the very least; for a start) be a place we can escape our humanity? A place to chill?

Mantronix make perhaps the most nihilistic music on the planet today; only House could claim to be more blank. Unlike rock nihilism, this is nihilistic without any drama, without an iconic figure like Michael Gira or Steve Albini--the creator simply, silently, absconds; creates an environment in which nothing of himself resides.

Unlike the first LP, which shared with hip hop a boastful, “deffer than the rest”  rapping style, on Music Madness the megalomania is vested in the whole expanse of sound, the inhuman perfection of the dance environment, rather than a charismatic protagonist. Poor MC Tee! This last token of the human seems to be fading fast. It’s as though someone has taken an eraser and all but rubbed him out of the picture: a little lost voice wandering in a vast, intimidating Futurist adventure playground. And the words uttered, in that fey, fragile voice, are little more than psychedelic gibberish, a vestigial anchor for us to centre our attention, otherwise dispersed and fractured across the jags and fissures of the mix. Mantronik is candid about the relative importance of text and material: “the words don’t mean shit, there’s no lyrical structure, but the shit pumps!”

You’re horrified, but after all, isn’t pop all about the desire to transcend or step sideways from the cage of one’s humanity? To be more, less or other than simply, naturally human: to become angel, demon, ghost, animal (butterfly or invertebrate). Mantronik’s desire is to be superhuman; he envies the prowess, the infallibility of the machine. He loves all the sci-fi films (the techno-heroic strand in science fiction that buffs call “hard sci-fi”, rather than New Wave s.f.’s odysseys into “inner space”). There are links between Electro’s space age imagery and the sword’n’sorcery/superhero comic book elements in heavy metal, speed metal… similar male fantasies of omnipotence and invulnerability.

For Mantronik, sampling is his “special power”, the key to demi-godhead. “You can take a sound, any sound, and you can tamper with it. Add other sounds to it. Look at its wave formations on a screen, and change the patterns around. And you don’t have to take sounds off records, you can get them from the environment, from hitting things against the wall, anything. And with my set-up, I can record music right up to the point doing vocals, in my bedroom. Then I go into a studio. With samplers, I never read the instructions. I like to learn from my mistakes and incorporate blunders.”

For Mantronik, the history of Black Dance Music doesn’t begin with James Brown, Sly Stone, George Clinton, even Van McCoy or Chic; it begins with Kraftwerk and flowers with Trevor Horn’s Art of Noise. It was the krafty krauts’ glistening plastic vistas and stainless girders, plus Art of Noise’s fleshless, faceless, sense-less and soul-less techno-symphonic sky’s-the-limit mastery that first made him want to make dance music. Indeed, Mantronik seems to take Trevor Horn as a kind of guardian spirit or touchstone, talking of how he’s “now working on stuff that would blow Trevor’s mind. I’m working on things Trevor wouldn’t even understand.”

Mantronik’s attitude to the past is strictly utilitarian, post-modern pagan; there’s no veneration, no allegiance to outmoded [beats]. His reprocessing of the past in in accordance with functionalist criteria, not nostalgia. “All those old Seventies percussion lines were recorded real rough, real shitty, using dirt cheap reverbs. There’s a certain old, gritty sound you just can’t achieve in a modern studio. What I do is take that old sound and bring it back, into the future.”

There’s nothing in the way of the rockthink cult of the origin, of roots here, but rather an insatiable pursuit of the fresh, the ultra-modern.  “The old music bores me.” Styles and beats have a rapid turnover, are produced in factory conditions. Mantronix are simply the latest stage in a long history of black music; the largely unwritten history of corporoate design, brand names, backroom technicians, rather than sacred cow artists or communities struggling to be heard.

What troubles critics about Mantronix, about house, is that they’re illegible. You can’t read anything into them. There’s no text, just texture, and those who endeavour to wrap meanings around the music are always shown up, the failed despots of discourse. The sheer opaque, arbitrary force of the music slips the net of meaning, again and again.

Instead, for those who listen, there’s the fascination of details, a seduction in the endless intermittence of dub. “The new stuff? A whole mix of things. Not play-it-safe. Kind of teasing, flirtatious. I’m not gonna give it to the listener all at once. It’s like if you’re going out with a girl, and she gives it you straightaway, you lose interest.” Mantronix never lose you, even as you lose yourself.

Posted by SIMON REYNOLDS at 2:05 PM