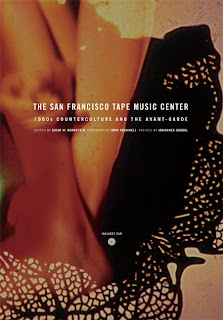 For most of its existence, the San Francisco Tape Music Center was based at 321 Divisadero Street, a building shared with avant-garde choreographer Ann Halprin and the progressive radio station KPFA. In the next door building, adjacent to the Center's performance space, was an apartment where Grace Slick's first band The Great Society rehearsed--sometimes at such volume they could be heard more clearly than the Center's own performers. As related by the Center's studio technician William Maginnis, this anecdotal sliver about one Bay Area vanguard drowning out another conveys a larger eclipse: the Haight-Ashbury contingent's domination of the history of 1960s San Francisco music. Every conceivable data-morsel pertaining to the acid-rock bands who played the Fillmore and the Avalon Ballroom , to the Human Be-In and LSD chemist Augustus Owsley Stanley III and triptastic poster artists Rick Griffin and Stanley Mouse, has been dredged up and deposited across a hundred books, memoirs, documentaries and websites. Yet until now the Tape Center has been lucky to get a chapter in one of the more inclusive histories of electronic music, despite the fact that composers as legendary and influential as Terry Riley, Steve Reich, Morton Subotnik and Pauline Oliveros passed through its portals. The disparity of attention is all the more puzzling given that the longhair guitar freaks and the electronic renegades not only drank from the same water table of Fifties-into-Sixties anarcho-mystical thought and sensibility as each other, but often crossed paths during this period (most notably at the 1966 Trips Festival). Hell, Reich even shared a tape-recorder with Grateful Dead bassist Phil Lesh, an academically trained musique concrete fan.

Aimed as a corrective to this dearth of documentation, The San Francisco Tape Music Center almost goes too far the other direction. The disparate array of texts gathered by editor David Bernstein-- which includes statements written during the Center's 1961-66 incarnation as a fully independent entity, oral history-style interviews with the key figures, retrospective essays written by some of the same, plus Bernstein's own overviews--makes for a wonderfully rich read, but does sometimes seems more like the raw ingredients for a history rather than the properly integrated thing itself. Because the Q/A's with each individual cover more or less the same events, which also get chronicled in a more detached, "official" tone in the essays, there's a fair amount of repetitiousness and redundancy. Still, each account does offer a different perspective, the various viewpoints and memory-sets overlapping to create a story thickly encrusted with anecdotal detail. Including such not-strictly-germane but nonetheless delicious digressions as the tale of how experimental film-maker Stan Brakhage lived in Subotnik's garage for an extended period, along with his wife and two small children, whom the Brakhages, on point of Beatnik principle, refused to diaper!

This book is also an attractive object, from the cover (a still from a light-show created by the Center's visual director Tony Martin) through the lavish illustrations (ranging from posters and programmes, to a pull-out of the cartographic diagram score for City Scale, a happening that used the urban space of San Francisco, to more color plates from Martin). There's also a DVD containing performances from 2003's Wow & Flutter event, where many of the Center's most famous pieces, like Oliveros's "Apple Box Double" and Ramon Sender's "Desert Ambulance," were reenacted.

Although members of the Center shy away from acknowledging a direct influence, strong parallels with the ideas of John Cage and Fluxus spring immediately to mind when reading about their feats of what could be called "concept sound". (Although in fact the Center's synaesthetes rarely limited themselves to sound alone, their pieces typically involving elements of theater or dance, and almost always involving the globular, polychromatic projections of "light composer" Martin). As with Cage, some seem like they'd be more fun to conceptualize in advance or read about after wards rather than actually sit through as performer or listener. Ramon Sender's 1962piece "Tropical Fish Opera" is a beautiful idea: a fish tank with sheet music-style staves daubed on all four sides, each of which had an acoustic instrumentalist (Oliveros, Subtonick, Sender, Loren Rush) playing the notes "composed" by the fish as they darted to and fro. Listening to its restaging on the DVD, I'd say it's… pleasant enough. Sadly there's no re-enactment of Sender's "I Laid Mr. Clean for the FBI", in which he played "the bath tub as an instrument" using his submerged body. Ahead rather than merely of-its-time, the Center's work involving tape-editing and primitive sound-synthesis seems more compelling and enduring to me. There's still a chilly alien thrill to be gleaned from Sender's dankly glistening electronic cavern "Worldfood XII" or Oliveros' "Bye Bye Butterfly, " which collides high-frequency whinnies generated on a synth invented by Center associate Don Buchla with "samples" from a Puccini aria (thereby beating Malcolm McLaren's "Madame Butterfly" to the punch by almost 20 years).

Two thing comes across loud 'n' clear (like the Great Society) from this book's interwoven accounts. The first is the collegial camaraderie between the principals ("we bounced off of each other's work with glee," writes Oliveros in her "Memoir of a Community Enterprise"). The second is the sheer ingenuity required to get results with the extremely limited means to hand. Oliveros relates how she used a bathroom tub as a reverb chamber and cardboard tubes as filters, how she achieved varispeed effects by manually rewinding her Sears Silvertone tape machine while in "record" mode. When the Center finally acquired decent funding, in the form of a grant from the Rockefeller Foundation, it had a paradoxically dampening effect on their collective engine of creativity. This was partly because the money was made conditional on the Center affiliating itself to an established institution, Mills College in Oakland--something that almost everyone involved realized, too late, they didn't really want to happen. But also one suspects it was because the challenge of overcoming technical obstacles and getting around rudimentary resources not only sparked creativity but was part of the fun. In 1966 the core figures of the Center began to disperse: Oliveros stuck it out for a year at Mills but quit for a better job at the University of California in San Diego; Subotnik moved to New York and became a kind of electronic music star; Sender, in many ways the most charismatic and engaging figure in these pages, a romantic who threw himself whole-souled into the Sixties adventure, joined the Morning Star Ranch commune. Today he runs a foundation to assist people looking to "exit experimental social groups" (and we're not talking about the LMC here).

The San Francisco Tape Music Center leaves the reader with a poignant sense of the fragile mystery that is creative synergy: the way that "vibe" settles in a place (a neighbourhood, a nightclub, an institution, even a magazine) and flourishes as a milieu of like-minds meshed in relations of mutual respect, loving cooperation and friendly rivalry, only to inevitably disintegrate in response to internal frictions and external pressures (and attractions). Dissipating, it leaves behind just the work, and the romance of its legend.
Posted by SIMON REYNOLDS at 6:51 AM