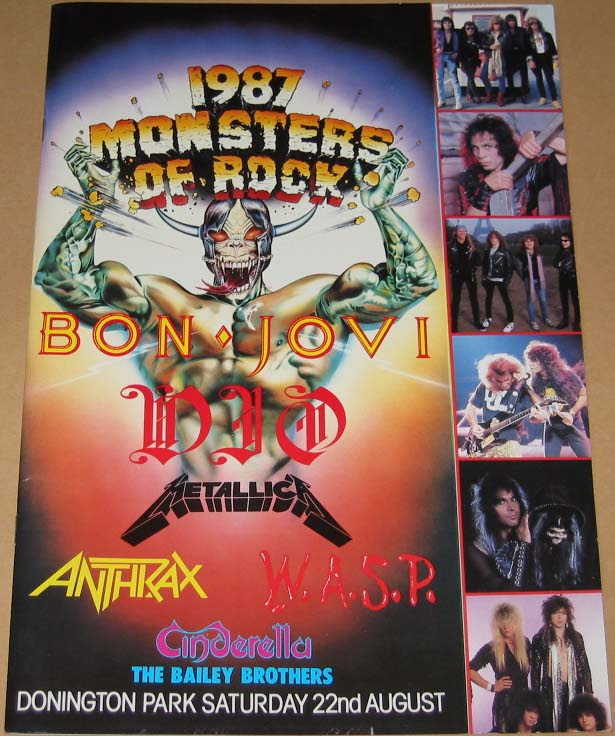 For this festival-virgin, Donington was a brutal deflowering; as futile and squalid as I could have hoped for. I always used to enjoy the music press's ritual encounters with the unbudgeable stagnation of heavy metal: they don't happen so frequently these days, partly because the papers realized how pointless these confrontations were, partly because because of a certain critical rehabilitation of metal. Listening to HM records at home, it's possible to isolate, salvage and enjoy elements of power, aggression, noise. But in the festival-context, where you encounter the totality of the subculture, you're overwhelmed by the sheer size and span of its dumbness; as a critic with dreams and schemes you're chastened by the realization that the word 'rock' means totally different things for different people. For these people, it's a celebration of the lowliest aspects of existence, vaguely in the name of breaking free and being yourself and letting loose inhibitions. Festivals are a chance for these people to live out their version of rock'n'roll with a thoroughness that's just not feasible in everyday life.

A crucial element is mud -- for how else can you wallow? The preceding week was a sweltering blaze, but the weather's not about to let the side down, and Saturday obliges us with a downpour. Within minutes of arrival, I'm soaked to the skin. The soil around here is rich in clay; eerie maroon puddles abound, while the Exits and Entrances degenerate into treacherous slopes the colour of a working man's caff cup of char. A bloke loses his balance and toboggans thirty foot of quagmire on his belly. A plucky paraplegic headbanger tries to negotiate the slope in his wheelchair. Girls's bare legs are streaked with red slime; high heels sink hopelessly into the mud. Others have come prepared, wearing binliner souwesters, or huddling completely enshrouded in giant sheets of transparent PVC. Troll-like figures squat on leather jacket oases. A 15-year-old bloy lies prostrate, comatose, his dank stringy hair mingling with the murdered grass; a few inches from his lips, a small pizza-shape of vomit. Unconscious before even the second group have come on.

If most people here seem experienced (as festival-goers), in another sense Donington is a vast celebration of virginity (or at least chronic sex starvation) camouflaged. The crowd is a huge sea of gormlessness. There's a dearth of fanciable men. People are either chubby-chopped or hatchet-faced, blubbery or scrawny. Common syndromes include the unsuccessful moustache; the Viking look; blokes with receding hairlines who nonetheless endeavour to grow long, straggly locks. The women tend to be buxom wenches or Sam Fox clones; there's a lot of electric blue make-up about. Everyone looks as though they're from Saxon peasant stock--coarse fair hair; rude ruddy health or underfed sallow. Everyone looks oafish.

W.A.S.P., then, is probably more a case of White Anglo-Saxon Protestant than We Are (Active) Sexual Perverts. "Any of you rock heads come here looking for PUSSY???!" bellows Blackie Lawless, and there's a massive roar of assent -- desperate, brave-face, wishful thinking. Lawless leads chants of 'Fuck Like A Beast', then 'I Wanna Be Somebody' -- both hopeless, never-to-be-requited cri de coeurs. Then some "theatre": Blackie wheels on a gallows from which a semi-naked girl is chained by her wrists, flailing ineffectually. Blackie looks to the crowd, that familiar wide-eyed gape at the depths of his own depravity, the extent of his daring. He draws out a scimitar, looks round again as if to say "Shall I?". Dumpy traitors to the sex smirk along with their boyfriends at the naughtiness of it all. Blackie slits the girl's throat, drinks deep and turns to face us quenched, drooling gore; glazed eyes appeal to us to share his disbelief at the enormity of his own evil.

W.A.S.P. are staggeringly bad at what they do churning out a leaden, thudding sound that no amount of climactic guitar-smashing can redeem. ANTHRAX are superb. The irony of a group of anti-nuke pacifists who've named themselves after one of the most ghastly weapons of biological warfare, should be obvious. Like hardcore punk, which they closely resemble, there's an unacknowledged fetishisation of the very violence and oppression they denounce. Anthrax get high on the extremity of the language of war and apocalypse. It's as though only imagery that sensationalist is fit to accompany their music, which is located not far from the point where the exponential curve of velocity/noise hits vertical. Anthrax aren't about uninhibited wildness or release; they take the rhythm-as-manacle idea to its logical limit -- rock as supremely regimented, mechanized carnage. When Charlie Benate pedals the floor tom and bass drum it's like an abbatoir slipping gears and locking into a perpetual cycle of mutilation.

They're great fun. Scott Ian -- manically stomping around the stage - is one of the charismatic metal guitarists. They play "God Save the Queen", getting the HM audience to sing "no fewcha"; it's stronger than the Pistols version, but lacks the edge. Anthrax play a blinder, but get less applause than W.A.S.P., perhaps because they're "sexless". They're driven by a pure, almost hygienic fascination with speed and violence.

METALLICA are like Anthrax only heavier and harder. That might be good on record, but tonight at least it only means they're gruelling; a dismal slog. Their death machine grinds remorselessly, with none of Anthrax's kinetic grace. "Seek and Destroy" and "Master of Puppets" attain a certain pleasing level of punishment, riffs like meat-cleavers. The singer's inter-song banter involves appending the word "fucken" to every noun or verb.

Where Anthrax and Metallica are clearly units, Bon Jovi and Dio take their names from their "charismatic" frontmen. The bands are servile, relegated to a backing role. Both Ronnie James Dio and Jon Bon Jovi are as much totalitarians of passion as Mick Hucknall or Terence Trent D'Arby, histrionic and over-expressive. DIO are melodic metal, that's to say they traffic in melodramatic, structured songs rather than chanted hooks (in Anthrax's case, flechettes). Someone once described this kind of glam metal as tart rock: pretty, hygienic guitar, purple lyrics, operatic singing, poncing preening frontmen. I'm fascinated by this sub-culture where it's actually a sign of manliness to have flowing Silvikrin locks. Tart metal seems to be a kind of male soft porn which functions for the delectation of both the girlies and (covertly) the boy fans.

One last wander before Bon Jovi. There have been many appeals to rock'n'roll solidarity tonight ("We Are Rock'n'Roll Children", etc), but in practice it doesn't extend more than a few rows ahead of you. People are quite happy to sling one gallon canisters of liquid thirty yards through the air in order to deal someone a blow to the back of the head, in the process dousing everyone beneath the missile's trajectory with a comet's tail of beer, or worse, still-warm piss. As anticipation of the headliners grows, the bottles and canisters teem like spermatozoa in the night air. It's cold: people are lighting bonfires, standing in bedraggled, post-apocalyptic clinches. There are massive queues for the food stalls (vile greasy grub that is breaking out furiously all over people's faces) or toilets (the bowls are smashed, so most people urinate in copses or into empty beer bottles). I pass a Samaritans stall, and consider making a brief distraught visit. Cholera breaks out on the right flank of the crowd. It occurs to me that the Americans don't have events like this: true, they've got a stadium circuit, but perhaps only the British would put up with the torpor, the lousy facilities, would actually pay to stand up for over ten hours solid.

BON JOVI cocktease the audience. After a very long delay, giant vidscreens cut to… Bon Jovi's dressing room! Bon Jovi making their way through the backstage maze! A superb baiting of the breath. And then amid a fanfare of fireworks and dry ice… Bon Jovi descend a Ginger Rogers' staircase…

I enjoy everything about Bon Jovi tonight except their music. In this sodden, beleaguered context, the lasers, the slick bombast, the no-expense-spared showmanship were as welcome as Hollywood razzamatazz in the Depression. Everything must have been rehearsed with military precision, every pout, preen and strut, because it was video-taped, quick-cut and blown-up on the vidscreens as it happened. MTV was inflated to the dimensions of a circus. I enjoyed, so help me, Jon Bon Jovi prancing about on the top of the lighting gantry, enjoyed their guitarist's solo (it blended most pleasingly into the giant, ziggurat riffs of Zep's "Dazed and Confused"). But the music isn't heavy metal, it's harmony rock, all rococo synth and soul-rich singing (euucch!). The tunes are trite, as trite and appallingly sentimental as the philosophical and emotional repertoire of the band. The titles tell the whole, stunted story: "You Give Love a Bad Name" (the Bitch who "promised me heaven/gave me hell"), "Wild In the Street", "Tokyo Rose", "Together Forever" (a ballad about friendship as syrupy as anything by Lionel Richie).

Bon Jovi constantly refer to "rock'n'roll" but there's nothing here that fits my definition of rock - no sense of provocation, no idea of change or movement, no impossibilist reproach to the world and its limits. The fantasies here are perfectly feasible -- it's possible to live a monied playboy life of rocking out and screwing foxy chicks, it's just very very unlikely that any of their fans ever will. Bon Jovi aren't rock'n'roll, they are showbiz, and showbiz is all about the idea that the world is as it can only be. Metal bands may call their music "heavy metal" but really they deal in light entertainment: their job is take people's minds off things. Tonight, Bon Jovi did a damn good job of taking my mind off my wet feet and incipient hypothermia.
Posted by SIMON REYNOLDS at 9:07 AM