The artwork of Panda Bear’s third solo album is full of clues. The front sleeve is a paddling pool fantastically packed with children and animals (tiger, seal, gorilla, leopard, koala, and yes, panda). Inside the booklet, there’s further brightly colored photographs: kids on stilts facing a sky mad with fruit bats and flying foxes, a boy in a kilt and a crocodile head-dress dancing a jig, a pigtailed girl riding a gondola through a sky swirling with feathers. These images set you up for music that’s tribal, ecstatic-yet-eerie, brimming with child-like wonder. And that’s exactly what Person Pitch delivers.

In Animal Collective, Panda Bear--real name, Noah Lennox-- plays drums and sings. Here, he builds a unique and refreshing sound almost entirely out of percussion and his own multitracked voice, influenced by teenage years singing in a high school choir. Opener “Comfy in Nautica” sounds like the Beach Boys if they’d joined Hari Krishna. A billowing vocal roundelay interwoven with looped bell-chimes, “Bros” starts as a mellow canter, then plunges into a spangled surge of acoustic guitars. The song sustains its rhapsodic pitch for twelve and half minutes that leave the listener drained and dizzy. “Good Girl/Carrots,” another 12 minute tour de force, kicks off with bubbling tablas and baby-talk, moves into a section where Lennox gently upbraids some uptight, know-it-all adversary, then skanks out under cascades of glistening sonic confetti. “I’m Not”, a skyscape of sighs and shivers, and “Search For Delicious”, braided from wobbled vocals and found sounds, both merge experimentalism and euphony. Like Animal Collective, Lennox pulls off the difficult trick of being simultaneously poppy and abstract, winsome and deranging.

Lennox’s previous album Young Prayer was a eulogy to his father,
a literally glowing tribute recorded in the room where Lennox Snr passed away. It doesn’t take much of a leap of insight to twig that Person Pitch is inspired by love and (re)birth: Lennox married a Portuguese woman, moved to that country (“a European California,” he says, laidback and sun-kissed) and had a daughter. It’s actually quite hard to imagine Lennox as a dad, though, because he looks and sounds so young. There’s a boyish buoyancy to the sound of Person Pitch, a pure-hearted nobility. The album’s core emotions--awe, curiosity, rejoicing, tenderness--are precisely the things that age and experience tends to erode. At once Sixties-redolent (specifically Dylan’s “I was so much older then/I’m younger than that now” and “he not busy being born is busy dying”) yet timeless and perennially applicable, the album’s open-hearted spirit is crystallized in the chorus to “Ponytail”. Lennox sings: “when my soul starts growing, it gets so hungry/I wish it never would, never would, never would stop growing.” 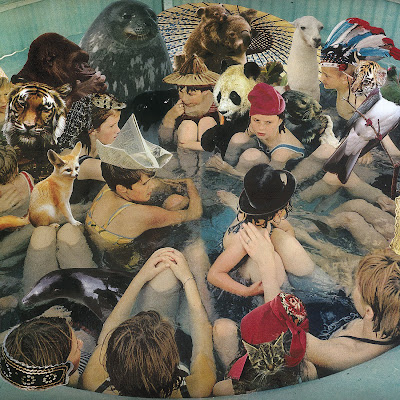 and its pre-photoshopped source image 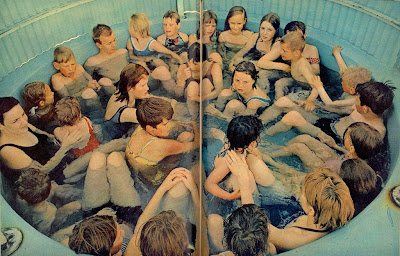 Posted by SIMON REYNOLDS at 8:48 AM

Couldn't agree more. Simon Reynolds, you've been my hero since I was eight or so, back in the day when my big sister and brother brought Melody Makers home and obsessed over Seefeel, MBV, Laika and other 'rad' bands.