In the interview accompanying this new edition of Radio On, director/writer Chris Petit uses the word "autistic" on three separate occasions to describe the mood he was aiming for. Embarking on his debut screenplay while still Time Out's film editor, Petit wasn't concerned with plot or character, dialogue or drama; his real interest was "buildings and weather". Watching Radio On almost thirty years after it was made, you do get the sense that more creative energy was invested in location scouting than psychology and motivation. The minimal narrative--a man, Robert B. (David Beames) drives from London to Bristol to investigate his brother's mysterious death--is a mere ploy to set the movie in motion and introduce the principal character: the urban landscape of late Seventies Britain.

Somewhere between Martin Parr's Boring Postcards and Anton Corbijn's Control, the movie has, as Petit notes, a documentary value first if not foremost. These clapped-out vistas of service stations, fly-overs, industrial estates, and business hotels rarely made it into UK cinema of the period. Radio On is not picturesque, then, but it is superlatively filmic, thanks to Martin Schafer's B/W cinematography, so high-contrast that glossy darkness frequently swallows up almost the entire screen, while during night scenes electric lighting burns through the murk with magnesium ferocity.

Radio On was an Anglo-Germanic production, jointly funded by the BFI and Wim Wenders' Road Movies company. Interviewing the German director for Time Out, Petit had plucked up the courage to say, "actually, I've got this script". Amazingly, his hero not only part-funded Radio On, he loaned Petit his cinematographer Schafer plus his wife, Lisa Kreuzer, as female lead. Even more remarkably, Petit ended up in the chair despite being a first-time director.

The influence of Wenders' road trilogy is a strong presence in Radio On, but equally important is another crucial mid-Seventies trilogy: J.G. Ballard's Crash/High-Rise/Concrete Island. The latter, a short novel about a modern-day castaway trapped on scrubland beneath the Westway flyover after being injured in a car crash, leaps to mind during the long aerial shot of Robert driving out of London, the camera lingering lovingly on the gash-ugly industrial wasteland that surrounds the fly-over. Another literary reference point is Margaret Drabble's The Ice Age, a novel often aligned with punk as a document of the climate of malaise and bunkered-down anomie in mid-Seventies Britain. Filmed in the month of January, Radio On exudes a coldness both physical and emotional. One song on the marvelously apt and evocative soundtrack sings plaintively about being "free from the frozen years at last".

Petit uses pop songs to externalize the feelings that his taciturn and blocked characters can't or won't express. That's not especially radical in itself, but music is deployed in an unconventional way that hovers ambiguously midway between diagetic and non-diagetic. A tune, ostensibly played on the in-car stereo, might abruptly dip down in volume but continue to play without fading away; Devo's stilted subversion of "Satisfaction' is made even more disjointed and alienated by being chopped into shards with sizeable chunks of silence in between. In the interview, Petit says he consciously reversed cinema's vision-over-sound hierarchy, aiming to make "sound with pictures". Hardly surprising that dance culture's terminology features in the title radio on (remix) , the 1998 mini-movie included with this DVD that "stalks the past" by revisiting the movie's original locations--places like Silbury Hill and Heston Services--to see how they've changed, while also subjecting the original film to computer-editing processes of deceleration, freezing, and zoom.

You could almost imagine the original Radio On as a series of unofficial promo videos made by a director responding to the mind's eye triggering potency of the era's vanguard pop: the experimental end of glam, German electronic, New Wave. Bowie's "Heroes" and "Always Crashing in the Same Car" are brilliantly deployed, as are Kraftwerk's "Radioactivity" and "Ohm Sweet Ohm". But oddly, British postpunk--seemingly, the obvious Ballardian musical analogue--is absent. Joy Division's "Transmission" and "Shadowplay' would have been a perfect fit. Still, postpunk does appear to have determined Robert's look: he wears Ian Curtis's Eastern Bloc overcoat and physically looks like the 5th member of Wire.

Radio On's title itself comes from The Modern Lovers' proto-punk anthem "Roadrunner", a hymn to the American dream of perpetual mobility. Jonathan Richman sings "I'm in love with the modern world", but Radio On's vision of modernity is unlovely and loveless. Robert's motto could be "only disconnect". A New Wave hit single used repeatedly on the soundtrack spells this out: Lene Lovich's "Lucky Number", where the singer goes from aloof autonomy ("my lucky number's one" ) to discovering that "two" (coupledom) is better by far. But Robert keep on looking out for number one.

There's a series of brittle interactions with aggrieved-seeming English women, from Robert's live-in girlfriend (always seen shivering and swaddled in layers of clothes or a duvet) who moves out without him even noticing, to the dead brother's lover (a bony, raven-haired girl with a striking resemblance to postpunk ice queen Siouxsie Sioux). Even doing his job as an all-night deejay at a biscuit factory, Robert lacks empathy. Reading out a female worker's request for "Help Me Make It Through the Night," he says "here's something better" and plays Ian Dury's "Sweet Gene Vincent" instead. His (im)passive aggressive demeanour eventually triggers female violence: in a pub he keeps getting in the way of a snooker game, provoking one of the women players to kick over the stool he's sat on.

Radio On's permafrost thaws slightly only a couple of times. Intimacy of a sort develops between Robert and Ingrid, a German woman (Lisa Kreuzer) searching for her five year old daughter. The movie's first smiles are cracked and Robert tags along on Ingrid's quest for a while. The other moment involves male bonding kindled through music. At a derelict petrol station in Chippenham, Robert meets a rockabilly-obsessed singer (a cameo from the then not-very-famous Sting) and the two men duet on another love-by-numbers song, "Three Steps to Heaven" (originally by Eddie Cochran, who died in a car crash on the nearby A4--how J.G.B. is that?) But these are ships-that-pass encounters. Ingrid ruefully notes, "last night I hoped we would sleep together… but we won't". About to drive off from the petrol station, Robert cheerily says "see you around Eddie", only for Sting's character to snap "no you won't" with unexpected bitterness.

In Radio On, the automobile is an ambiguous symbol, representing less autonomy than autism, promising not the freedom of the open road but the emptiness of a life unmoored from emotional ties. The road movie, as Petit knew from the off, wouldn't translate to the UK's spaghetti junctions and landscape-scarring bypasses, but that was the point. Just compare the word "motorway"--as dourly, phlegmatically British as "mustn't grumble"-- with "highway" and "freeway": it simply doesn't set off the same utopian resonances of transcendence and liberation. Robert's vaguely American-looking 1950s beaut of an automobile is out of place, a relic. Along with Wenders road movies, Petit admired Monte Hellmann's Two-Lane Blacktop. His equivalent to the latter's nihilistic closing image--the celluloid catching fire in the projector as the race drivers hurtle to nowhere--could easily have been when Robert steers his car to the edge of the precipice above a grim quarry. (Unconsciously or not, an echo of the denouement of another anti- road movie, Spielberg's Duel). But suicide would be cheap resolution and catharsis of the kind Petit determinedly avoids and the movie doesn't end there, not quite. 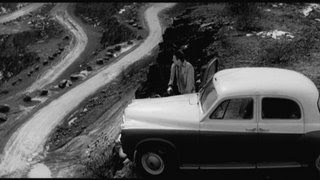 Radio On shies away from a political reading. Petit was adamantly opposed to social realism, studies of the fine gradations of the class system, and other hallmarks of 1970s British cinema (he singles out Abigail's Party as his antithesis). Nonetheless, political reality leaks into Robert's bubbleworld, forming an ambient backdrop of dislocation and tension. The radio drip-drips endless bad news from the IRA and Baadher-Meinhof to a West country porn ring that (it turns out) might have some connection to his brother's death, along with heavy snow that paralyses much of the country and the perennial bathos of no-score draws on the football results. There's a 'Free Astrid Poll' slogan spraypainted on a London wall and a tiny hint that Ingrid originally left her daughter with her estranged husband when she got involved in some kind of radical wildness. Society is falling apart but Robert is all uncomprehending detachment: as he tells an unbalanced hitchhiker, a squaddy gone AWOL from his Northern Ireland tour of duty, "I never understood what the problems were".

When Robert strolls past an industrial park en route to his car, a sign on a warehouse wall advertises Shock Absorbers. Cars have them, but they can also be them, insulating their occupants from the Real and the Social. "Here in my car/I feel safest of all," sang Asbergers sufferer Gary Numan in 1979's "Cars". "I can lock all my doors/It's the only way to live." Is there a glimmer of hope at Radio On's end when Robert abandons privatized transportation (as favored by car ownership fan Margaret Thatcher) for the shabby, inefficient, but resolutely collective British Rail? Perhaps that's to read too much into this resolutely oblique, brilliantly opaque movie.
Posted by SIMON REYNOLDS at 9:33 AM

when you mentioned that Numan had Asperger's Syndrome (as I do) you might also have mentioned that he was (apparently) an admirer of Thatcher ... knowing this, I have never been entirely sure in what sense "Cars" is *anti-social*: in an autistic desire for personal isolation or in a nascent (and not widely realised at the time - 1980/81 TV ads for e.g. British Airways were at the time perceived as in line with Thatcher's vision of imperial glory somehow restored, and yet they simply don't make sense once the psychological glue of nationalisation is taken away, which didn't really happen until her second and third terms) political desire for privatised individualism?

I had Numan on my mind this week actually: his era was probably the time in the last half-century of Britpopcult when (white European) logic took the greatest precedence over (black American) emotion (though the Associates made the greatest album of all time because McKenzie had no time for logic, redefined "soul" as something entirely European), but the extent to which Numan took logic over emotion goes beyond even the norms of the time: it's like a *caricature* of what such a position would be like, which is how people with Asperger's (including me as a child) can and do seem to many. Young Marble Giants are utterly outside the rock/soul/blues lineage, and to me (and this came through strongly in some of Alison Statton's later work) they articulate a dream of a social democratic Wales set free from England's humming and hawing, but they are *human* in a way that anyone not right out there with Weller/Hewitt could accept as such: they don't seem indifferent to other people's feelings and inconsistent ways. Numan most certainly does.

People with Asperger's Syndrome are, often, unrequited conformists (as I am): they desperately wish they could be part of a community which they know will never have them (in that respect they've got a lot in common with Morrissey). Aggressively privatised individualism doesn't usually appeal to them, however much those who don't really know the territory might guess it would.