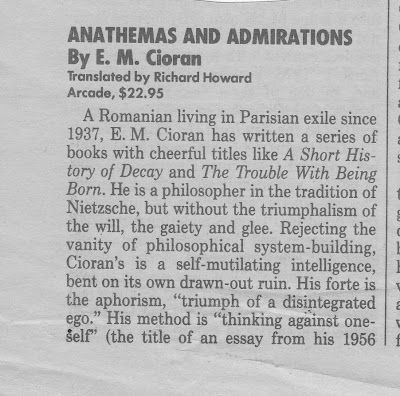 Posted by SIMON REYNOLDS at 7:52 AM

I love this book -- it turned me on to quite a few writers and ideas.

Too bad the fascist Romanian years surfaced before the NOTEBOOKS came out in English -- maybe they'll never make it to now.

I can forgive Cioran for his appallingness. Did you read Jason Weiss's interview with him? He suffered enough for his sins.

Blanchot seemed to survive his round of controversy. Is Cioran going to be forever discredited?

Not to make excuses for Cioran but i think between the wars if you were young and idealistic (and looking for an alternative to capitalism) there were two ways you could go, one was International Communism and the other was some form of ultranationalism. the same kind that things that fuel his philosphy -- disgust with the world, misanthropy etc -- must have led him politically to some kind of idealisation of the Nation as pure, an image of Order, the class struggle resolved or magically healed over, etc etc. But if circumstances or his social background or formative influences or whatever had been slightly different, you could imagine the same kind of impulses leading him to Communism.

No I never read the interview -- is it online?