The World of Arthur Russell

by Simon Reynolds
It's an unlikely story: avant-garde cellist sees the light in a disco glitterball at New York gay club The Gallery and decides disco is the ultimate modern format for exploring minimalist composition.
In the mid-'70s, Russell — conservatory-trained, a scholar of Eastern music forms, steeped in the ideas of Steve Reich and Terry Riley — was blown away by the engulfing quality of music  transmitted over a massive club sound system and literally  entranced by disco's use of repetition. Over the next decade, collaborating with New York's leading DJ/remixers  and recording engineer Bob Blank, Russell produced a series of captivatingly quirky 12-inches under a variety of aliases — Dinosaur L, Indian Ocean, Loose Joints — in the process establishing an enduring cult reputation.
Russell's most famous tunes, the dub-sluiced Dada-disco of 'Go Bang' and the relatively conventional-sounding 'Is It All Over My Face' (not the plaint of someone eating spaghetti bolognese but a club goer who can't hide his attraction to another dancer), pop up regularly on compilations. But most of Russell's oeuvre is near impossible to find, with obscurities like 'In The Light Of The Miracle' fetching huge sums on eBay. Now Soul Jazz have punctured that little market and done us all a favour by compiling some of Russell's best moments (including 'Miracle'). And 2004 will see a long-overdue Russell reissue programme kick into overdrive, with re-releases and compilations from Rough Trade and the Audika label.
'Let's Go Swimming', originally released on Rough Trade in 1986, might just be Russell's finest five minutes. It's impossible dance music. Waves of polyrhythmically perverse percussion jumble your urges, confounding your body with discontinuities of beat and strange cross-rhythms. This is disco for contortionists or an alien race blessed with an odd number of limbs. All thermal updrafts and tidal currents, the mix really does sound aqueous — synthesisers gibber like dolphins and bright sound-clusters dart, swerve, double-back and vanish like shoals of exotic fish. 'Let's Go Swimming' makes me think of a kinetic, animated version of a late-period Matisse, one of his deliberately naive seascapes made of cut-out blocks of blue and green. 'Keeping Up' and 'A Little Lost' are more in the non-dance vein of Russell's other Rough Trade release, 1987's World of Echo. Accompanied by his own effects-treated cello, hand percussion and acoustic guitar, Russell sings meandering, rapturous melodies in a bleary, beatific mumble. Vaguely reminiscent of John Martyn on Solid Air, Russell had a wonderful voice — indistinct around the edges, eerily lacking a stable centre, a gorgeous fuzzy cloud of longing and languor that seems to wrap itself around you in a gaseous embrace.
For precursors, think of Can's cosmic funk, Martyn at his most and dub-flecked ('I'd Rather Be The Devil', 'Big Muff'), Weather Report. For contemporaries, think Czukay's sunkissed Movies, the alien time signatures of Ryuichi Sakamoto's B-2 Unit, the strange new emotions and inbetween mindstates of Thomas Leer's 4 Movements, Remain In Light-era Talking Heads (who Russell almost joined at one point). Successors: the lush digital foliage of A Guy Called Gerald and 808 State, Bjork at her most undulant and jazztronic, the texturological and rhythmatic convolutions of drum'n'bass explorers like 4 Hero. Russell really is the lost visionary that these parallels suggest.
The World Of Arthur Russell is splendid but in truth only scratches the surfaces of Russell's officially released work (plus there's mountains of unreleased material originally deemed too kooky for the '80s post-disco market). In parallel with his "dance" output, Russell made more experimental/instrumental records like Tower Of Meaning, while World Of Echo suggests a third path for him as a sort of kooky singer-songwriter (in moments you can imagine him as a peer to Joni, Rickie Lee or Mary Margaret O'Hara). Sadly, Arthur died in 1992, before truly fulfilling any of these potentials, but along the way left a trail scattered with gems of scatty genius. 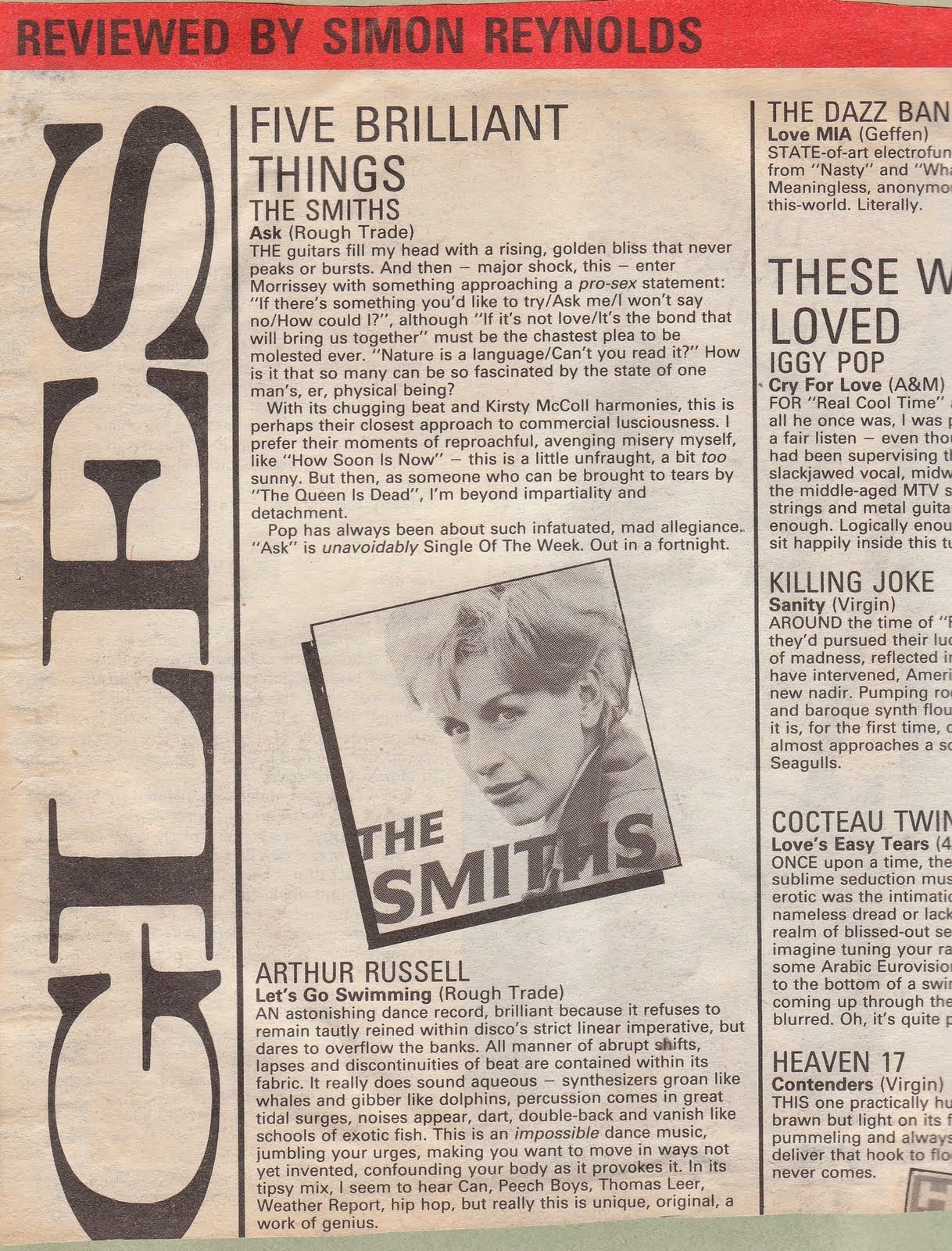 I really wish I could see the the chopped-off words in the Iggy and Heaven17 reviews.

i really wish i could tell but i don't have that singles page readily available - the scan is an old one i did about 5 years ago. not sure where that cuttings book is at the moment