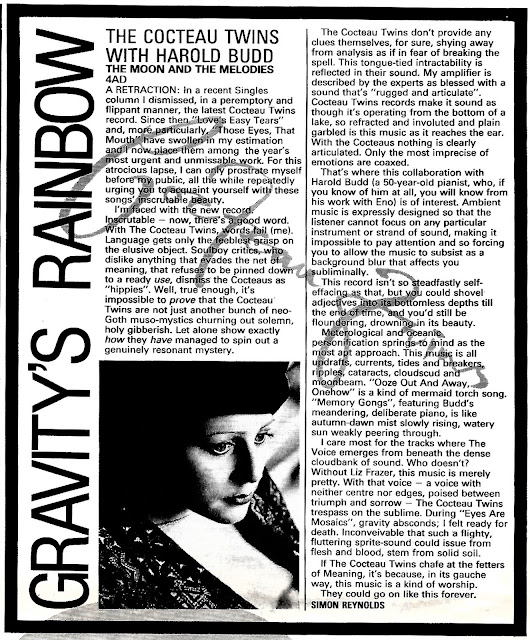 Cocteau Twins + Mazzy Star - live in NYC - December 1 1990 - Melody Maker
typo alert - "foyer" should be "cover" (mistaken by Vaughan as a diss, nothing could have been further!) 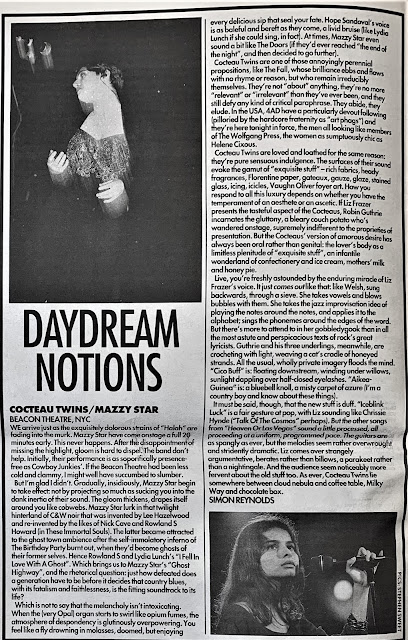 The Moon and the Melodies

No one would claim this is Harold Budd’s finest half-hour (that would be his Brian Eno Ambient Series collaboration The Plateaux of Mirror), nor that it’s the Cocteau Twins’ peak achievement (too many contenders to list). But it is a captivating cul de sac off  the beaten track of both artists’ trajectories. And an apt pairing, given their idyllicism and mutual ardour for effects-saturated texture. Cocteau soundboys Guthrie and Raymonde do a good job of standing in for Eno on “Memory Gongs”, cloaking Budd’s piano in a mist of reverb to create an effect like the autumn dawn-mist slowly rising while a watery sun peeks through yellow-hazed sky. The instrumentals are nice but inevitably the most breathtaking moments come when Liz Fraser’s voice enters the soundscape. All updrafts, currents, tides and breakers, “Ooze Out and Away, Onehow” is a mermaid torch song, while the shatteringly lovely “Eyes Are Mosaics” would be regarded as a Cocteau Twins classic if it had appeared on one of their “proper” albums.
COCTEAU TWINS

It’s so hard to pick a Cocteau Twins album as the One. Head over Heels is their early classic, and EPs like Sunburst and Snowblind, The Spangle Maker and Love’s Easy Tears are mid-period highs. Still, Blue Bell Knoll is their most flawless record, and also the one that’s the most approachable for virgin listeners while still retaining the group’s bottomless mystery. You can hear a smidgeon of Kate Bush on the title track opener, but Fraser soon sheds all ancestral traces to assert her candidacy as one of the five or six most original vocalists of the rock era. Likewise the group, having started out as a sort of soft-core Siouxsie & the Banshees, now mature into a sound without parallel or peer. Lindsay Buckingham to Liz’s Nicks, spangle-maker Robin Guthrie drapes his lover in iridescent canopies of guitarstuff. Fraser’s sculpted gush of liquidized language is almost entirely indecipherable but always sounds rich in wholly private, non-verbalisable meaning.  Sometimes these sweet nothings seem like songs for swooning lovers, sometimes they seem literally like baby-talk, making you imagine an Eskimo mother chirruping to her newborn. The Cocteaus struggled after this album:  when you’ve made songs as sublime as “Carolyn Fingers,” ‘Cico Buff” and “Ella Megablast Burls Forever”  what do you do for an encore? They made a mistaken pop-wards move, with Fraser singing first in better enunciated gibberish and then in distinctly plain English. She said so much more when you couldn’t understand a word.

“Tales from the Trash Stratum”

The original “Trash Stratum” on 2020’s Magic Oneohtrix Point Never entwined distortion and euphony in fairly familiar Dan Lopatin fashion. This year’s drastic reinvention lovingly collages ‘80s production motifs: pizzicato string-flutters as fragrant as Enya, blobs of reverb-smudged piano that evoke Harold Budd, high-toned pings of bass that could be The Blue Nile or Seventeen Seconds Cure. It’s like Lopatin is a bowerbird building a glittering nest to attract a mate – and succeeds in reeling in the onetime Cocteau Twin.  Fraser’s contributions -  ASMR-triggering wisps of sibilant breath, chirruping syllables from a disintegrated lullaby – are closer to a diva’s warm-up exercises than an actual aria, and sometimes you long for her to take full-throated flight into song.  But it’s lovely to hear the Goth goddess brought into the glitchy 21st Century. 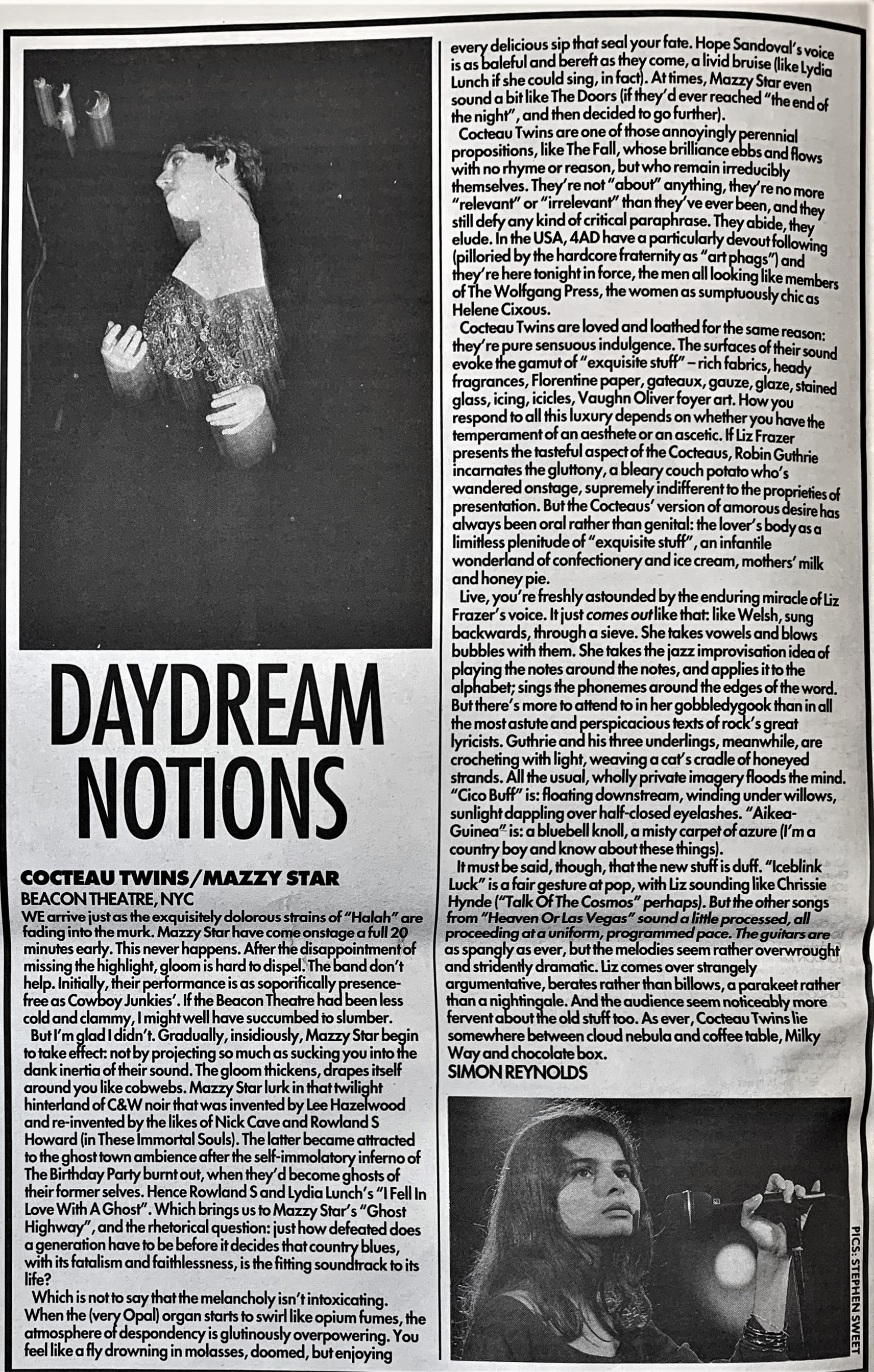 Newly enamoured with Cocteau Twins, so loved this. Treasure and Heaven... are my picks for most flawless, though! And Abandoned Cities for Budd.