The House of Love 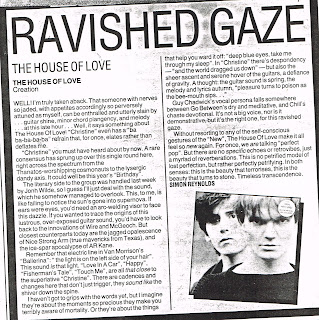 The House Of Love's Guy Chadwick

Did you, like me, forget all about Guy Chadwick? Did the "godlike glow" of ‘Christine’, ‘Destroy The Heart’, ‘Love In A Car’ — pop so brilliant it burned your eye — fade from your vision too? We can hardly be blamed. Somewhere along the way, The House Of Love, paralysed by expectation, developed a death wish. Somehow, all the magic was worried out of their music.

But suddenly, just as Chadwick seemed to be slipping irrevocably into the ‘forgotten men of pop’ category, here comes a new EP, brimming with songs like ‘The Girl With The Loneliest Eyes’ that bring back the primal rush, the glacier up the spine, that made us care in the first place. And here’s Guy Chadwick to talk about how he came through his ‘dark night of the soul’, and got back on the right track. "What happened, even before Terry left, was that I lost my belief in the group — and I don’t know why it all escalated. It just didn’t seem to be as important as when I started out."

This was rather unfortunate, considering the huge amount at stake — critically, and not least, financially.
"Musically, it just wasn’t happening. We’d stated everything on the first album. I would present a new song, and we kept making the same noises. And that inertia carried away through right to the end of 1990. I needed time to get away from the group, to write and listen. I’ve spent almost a year listening to music, rediscovering my passion for music. I was determined to have enough time to finish the work.
"But we were broke, and the only way to get more money was to start recording the next album — that’s the way contracts work. But we weren’t ready. I wanted more material to choose from, and for the group to be much better than it was. So we bought time by going on the Continent and playing a lot of lucrative shows. And we developed as a band. Then the money ran out again, a month ago, so we started work on the album. It’s the first time we’ve ever been in the position of having 30 or 40 songs. ‘The Girl With The Loneliest Eyes’ was the first song I completed last year that made me think I could still do it."

Was it the classic rock ’n’ roll crisis: the first album is a life’s anguish released in one cathartic, incandescent burst; the second album lacks inspiration because, instead of living, you’ve been gigging, ligging and doing business?
"Kind of... I was very aware of the way I was perceived. With the first album, I hadn’t got a clue what the songs were about, they were just words. And being interviewed and interpreted made me very aware of how angry that album was, how much frustration was in it. And I realised exactly where each song came from. It’s almost like a diary. The record documented a long period; some songs dated back a long time before The House Of Love.
"I hadn’t learnt the craft of songwriting. Through so much listening in the last year, I’ve tuned into so much music that I was never aware even existed. From Scott Walker to Public Enemy to Sonic Youth to The Beach Boys, I’d subsisted before on a staple diet of Velvet Underground, Stones, The Doors, The Beatles. I’ve always liked things on the radio. I’ve never kept a grip on what’s been happening. I’ve always been uninterested in what one is supposed to be aware of. I don’t know whether it’s ignorance or just a childish rebelliousness. At the end of last year, when I hadn’t got an ounce of confidence, my publisher started chucking records at me every time he saw me. He was a catalyst."
So you lost it — confidence, the knack — when people hailed you, and started expecting things from you. And then as soon as people started to write you off, you got it back? Paradoxical! Wasn’t the praise what you’d always dreamed of?
"It was and it wasn’t. All singers and writers want recognition, whether teen adulation or serious consideration. I think what happened was that my head exploded, I couldn’t cope with it. A year just went."

It must gall you, the way people have seized on the brilliance of Levitation as proof that Terry Bickers was the real genius in The House Of Love.

What's great about The House Of Love’s new songs is that the music has a flow to it. The second album felt like it had been worked on too much, perhaps to compensate for the lack of an initial spark.
"The thing that I needed was a really good group. And it started to gel only recently. We’ve now got the capacity, which I need for my writing, to go from the gentlest kind of thing to sounding like Sonic Youth or even Glenn Branca."
That side of The House Of Love comes through on the EP’s ‘Purple Killer Rose’, a fulminating downpour of guitar approaching the first album’s torrential ‘Touch’. Guy sounds very fraught indeed. At the opposite extreme, there’s ‘Tea In the Sun’, Guy’s fragile, bereft vocal cocooned in a cascading myriad of acoustic guitars. Then there’s the cover of The Chills’ classic ‘Pink Frost’. A daunting song to trespass upon, surely, since it’s about watching a friend die?

"I love that record, and the rest of that Kaleidoscope World album — it’s like early Cure, very simple. It was Chris’ (bass) idea to do it. He’s a New Zealander. I was very much aware that we could do it justice or fail terribly. I approached it from the point of view that it was a kind of folk song. We could have The House Of Love-d it up. But we just loved the way it was. Chris tried to get me to sing it with an Antipodean accent. There was an element of me mimicking the original vocal. I thought the ‘pink frost’ image referred to dead flesh. Either that or it’s a New Zealand drink! It was a really difficult song to cover, cos musically it’s really primitive, there’s no logic to the form of it."
So Guy Chadwick’s relaxed again, he’s eased out of the creative constipation. But he’s still under enormous pressure. Phonogram want big, big sales. Chadwick claims he’s glad of their bluntness.
"They want us to be superstars. When we signed, we took them for a lot of money. And you can’t just turn around, three years later, and say, ‘We’ve decided we’re a cult band after all’. I like a lot of extremely popular groups. And I guess I’d hope to be their musical peers." Like who?
"R.E.M. To me, they’re the epitome of everything good. That last LP is one of the best I’ve heard for years. ‘Losing My Religion’ — it’s classic bedsit, pimpledom stuff, yet it was a huge hit. A group I love and who I think are extremely neglected critically are Depeche Mode. Have you every listened to Violator? Every single song is a classic, and the lyrics are so devious. It borders on genius. The sampling is outrageous. ‘Personal Jesus’ is based on a John Lee Hooker song which they’ve Kraftwerkized. For me, that’s one of the most important records I’ve discovered in the last two years. And I saw them at Wembley and they just blew me away. They’re so arrogant. Martin Gore in his tutu cranking out the riff to ‘Personal Jesus’!"
Guy says he’s really disappointed with the way the English music scene has developed since 1989. "There’s so much laziness." Does it piss him off that people have criticized him for ‘failing to transcend his influences’, when there are droves of groups (the most fatuously feted examples being Blur and Chapterhouse) who are so far from transcending their influences, it’s a case of them being welded to, and assembled out of, their record collections? Limited, unimaginative record collections, to boot?
"It does. Or rather, it used to. I’ve stopped paying attention to the press now. It’s nice at first, but it does your head in eventually."
In summation, then, it seems like it was only when we started ignoring him that Guy Chadwick got back in touch with his muse. Presumably, now that he’s back in critical favour, he’ll be f***ed up for the next two years! Strange man.

Posted by SIMON REYNOLDS at 7:22 PM