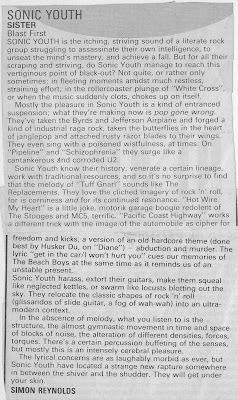 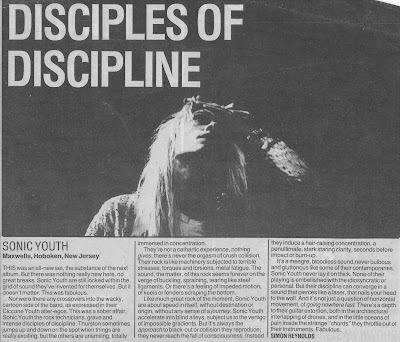 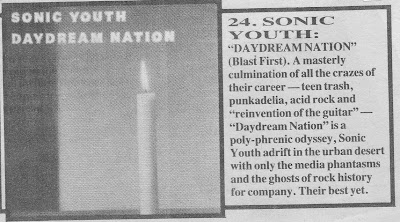 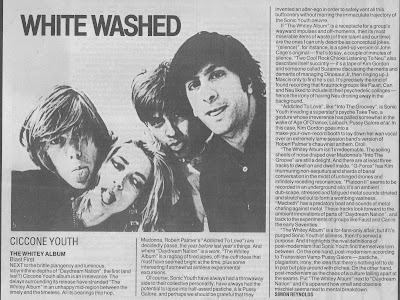 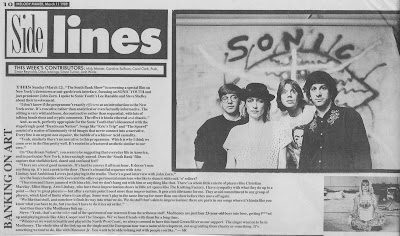 It's a strange trajectory that Sonic Youth have followed, from their early "Kill Yr Idols" iconoclasm to their present mode as rock mythomaniacs bringing up the rear for Neil Young (an idol of theirs). And as "Eric's Trip" blazes over the heads (in every sense) of the bovine arena hordes, one has to wonder whether your average cud-chewing US rocker can get his head around the rock-as-radiation/kaleid-ophrenic lyrics aesthetic. Like, where are the riffs, man?

Sonic Youth look awful small in this environment, but their music fares a lot better. The venue's scale and extra wattage bring a whole new volume (in the cubic, voluminous sense) to their sound. Even the songs from Goo, which seemed so trimmed and lame on vinyl, now rage in sparkling 5D, free of the album's dead-aired, dessicated production. I still marvel at how the people who wrote the lyrics for Daydream Nation (among the best rock poetry of the last decade) could also be responsible for twee conceits like "Tunic" or "Kool Thing". But live, the dumb words are swamped; "Kool Thing" is jagged and forbidding as a glacier, while "Tunic" gives way to a fissure of clustered harmonics hanging in the air like motes after a quarry explosion. For me, it's still Lee Ranaldo who's Sonic Youth's true textural/tectonic wizard, and Thurston & Gordon who are culpable for the Pop Art/postmodern fetish for 2D cartoon imagery of teen revolt and radical chic. But with the closing, awesome "Expressway To Yr Skull", such distinctions are obliterated. The sound is collective, amorphous, seemingly origin-less; at first a deadly mirage, then, in the Hendrixian feedback-sculpting coda, membrane after membrane of mummifying haze. Sonic Youth, as irritating individuals, disappear in their own wake.

Hendrix's "Star Spangled Banner" trails the arrival of Crazy Horse, and prompts a ghastly misunderstanding; most of the audience are oblivious to the agonised irony of Jimi's version (the sonic equivalent of burning the flag as a torch for the young dead in 'Nam) and respond with unmistakeably jingoistic fervour. But the misunderstanding originates in a crucial ambivalence in Neil Young's own attitude, externalised in the disparity between the peace flag unveiled behind the stage and the yellow ribbon for the troops tied to the giant mike stand upfront. Young's audience comprises both burnt-out hippy pacifists and blue collar patriots because he himself has followed a trajectory from the counter culture to born-agin Reaganism. And these contradictions turn on the ambiguity of the word "freedom" - whether it simply means a free market society or some grander, vaguer existensial liberty; whether the first might in fact be the enemy of the latter.

Neil Young's work is located in the slipstream of the two great American traumatic disillusionments: the closing of the frontier at the end of the 19th Century, and the closing of the psychological/existensial frontier opened up in the late 1960's. "After the goldrush", there's just stranded lives, stagnant ideals, a utopia gone awry. Today, in the midst of US industrialised rock, Neil Young and Crazy Horse have a mythical resonance similar to that vested by Sam Peckinpah in the aged outlaw gang of The Wild Bunch: they're incorrigible, cantakerous, battered yet heroic survivals of a grander age. But instead of the railroad companies, it's MTV and a rock biz integrated with Hollywood, advertising and merchandising, that's ushering in a lowlier future.

With his grizzled locks (clearly a stranger to conditioner), weatherbeaten countenance and stooped gait, Neil Young seems to contradict his own adage that "it's better to burn out than to fade away". Except that his music uniquely combines ragged stamina and tempestuous incandescence; at its peak it's like a decrepit inferno. What shocked me was the sheer NOISE of his playing. Young brings new meaning to worn-out terms like "powerchord" (even on sweet songs like "Cinnamon Girl", they're like breakers crashing over your head) and "catharsis". His solos aren't decorative, but volcanic, driven, purgative, like he's trying to untie an unyielding knot of anguish inside himself. Stomping grimly around the lip of the stage, lashing and gouging his instrument, Young churns up a sensurround maelstrom that's like the missing link between Jimi and Albini. "Break It Down" and "Fuckin Up" are sundered by a freefall of mangled wreckage and flaming debris.

Where Sonic Youth are avant-gardists dipping a toe in the populist mainstream, Neil Young's populist rock'n'roll breaks its own hokey bounds continually, spills into free noise. Like his politics, Young's music blurs the border between reactionary and revolutionary. If there's nostalgia here, it's not a wistful longing for home but for homelessness; an untamed wilderness unspoilt by settlements and sell-outs, a place "where I can leave myself behind". That foreclosed frontier of freedom rages still in the razing glory of Young's guitar.

If ever a band deserved an expansive approach that bursts the limits of the rock biography format, it's Sonic Youth. They're one of the most pretentious (a compliment in my book) rock bands of the last decade. Sonic Youth have always consciously aimed to refract the Zeitgeist in their noiseswirl; they're culture vultures who ransack both avant-garde and trash for morsels of inspiration. This is not a dumb band, despite their puerile admiration for the thoughtlessness of teen delinquents and psychopaths; this is a learned band. Bassist/singer Kim Gordon used to write art and music criticism for Artforum and Village Voice; the band's record sleeves have consistently used work by artists like Raymond Pettibon and Mike Kelley.

Nonetheless, Alec Foege shies away from using this band as a lauching pad for high-falutin' speculation. Confusion Is Next conforms to the pedestrian, fact-bound norms of the rock biog. Foege is able enough at untangling the roots of the band in the late '70s downtown No Wave and avant-garde scenes. And like most fan-biogs, this is a treasury of fanziney data, like the fascinating nitty-gritty of Thurston Moore and Lee Ranaldo's use of weird tunings and their mammoth collection of fucked-up, unique-sounding guitars. But anything more ambitious--i.e. what Sonic Youth "means"--and Foege's prose starts to seize up. His account of how and why the Sister LP was deeply influenced by Philip K. Dick's paranoiac s.f. is hopelessly befuddled, and his attempt to sketch the political backdrop to Goo lapses into bombastic socio-cultural generalisations that reek of an over-caffeinated brain at 5-30 AM the day before final deadline.

Foege casually uses the phrase "revolutionary rock band" to describe Sonic Youth, but he never really suggests why they might be revolutionary, nor indeed what such a phrase could possibly mean in the '90s. Actually, SY's journey from Lower East Side noisenik cult to Geffen-indentured art-grunge semi-stars raises a host of questions about subversion, about the rival strategies of avant-garde purism versus entryist populism. Sonic Youth have lived on both sides of this dilemma, making brilliant avant-rock with Sister and Daydream Nation, then trying to bring a tidied up version of that extremism to the MTV masses (with the botched Goo and the merely solid Dirty). As Greil Marcus argues here, SY are bohemian at heart, have always lacked the pop instincts "that animated Kurt Cobain at his best". They're most inspired musically, most true to themselves, as margin-walkers forever searching for the new cool, always staying ahead of the herd. Cooler-than-thou is why they're always interesting, but also why they're a band that's hard to love.

With their most recent LP, the wilfully anti-commercial Experimental Jet Set, Trash and No Star, SY's frame of reference has shifted from the 'alternative mainstream' (Nirvana, Smashing Pumpkins, bands they influenced but could never match in the marketplace), back to the indie scene: lo-fi bands like Sebadoh and Royal Trux, improv-squall artists like Keiji Haino and Rudolph Grey, a world of 7 inch singles, one-off collaborations, and bands who deliberately use antiquated, valve-driven studios rather than state-of-the-art digital recording. Perhaps Sonic Youth realised, after 'Smells Like Teen Spirit', how quickly disruption is smoothed back into business-as-usual. Perhaps they realised that their true voice was not outspoken (the quasi-anthemic "Youth Against Fascism", on the election-year Dirty) but cryptic, cloudy, and yes, confusing. A book about Sonic Youth that tries to make "sense" out of that sensual chaos is missing the point, surely; it should aggravate the confusion, be as hallucinated as the band's best work.

these reissues in honor of the recent flurry of books about and/or inspired by "the hippest cats on the block" who "make everybody else look square" (D. Keenan)
Posted by SIMON REYNOLDS at 8:49 AM