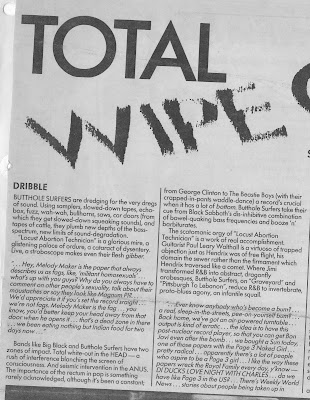 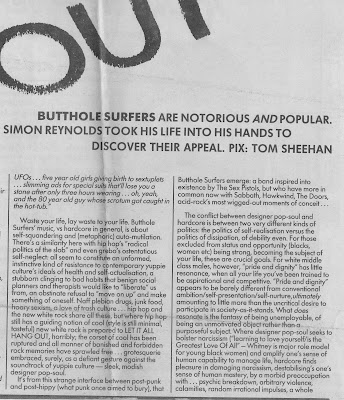 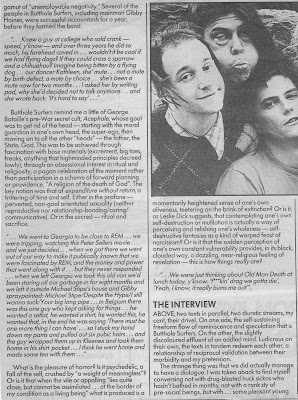 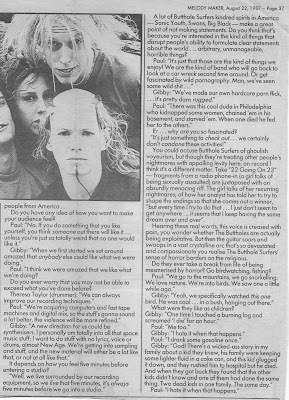 After over a year of silence, the Butthole Surfers have re-emerged only to suffer the indignity of being topical. With uncanny punctuality, their cover of "Hurdy Gurdy Man" coincides with the current Donovan revival (an upshot almost as bizarre as the rehabilitation of The Carpenters earlier this year).

"Isn't it horrible?" says Gibby Haynes, on the phone from Texas. "We had no idea that Donovan had suddenly become hip. See, we've been playing that song live for years and years."

The original "Hurdy Gurdy" was weird enough in its own right, and the Buttholes have only marginally increased its queasiness by putting a stomach-turning wobble in Gibby's vocal. Still, it's strangely appropriate that the Buttholes should be the Happy Mondays' accomplices in rehabilitating the twee troubadour of flower power. There's a case for saying that the Mondays are the nearest the UK has to a group like Butthole Surfers. Both groups have trailblazed the return to frying your brain with hallucinogens. And both groups' "art" consists of a torrential outpour of plagiarised and pastiched fragments of pop history, media flotsam and jetsam: a regurgitation of all the cultural garbage that's been shoved down their throats.

"I don't know too much about Happy Mondays or the Manchester thing," says Gibby. "We played there once and they hated us. Kathleen stood on her head for three songs. The promoter said se couldn't come back."

In fact, the Buttholes have been disconnected front the state of pop for over two years. Since 1988's Hairway to Steven they've been lying low in Texas. Gibby has been absorbed by his obsession with video technology and computer graphics, one byproduct of which has been the perverse, rubberised images on the cover of last year's Widowermaker EP, and the garbled, gurning faces on the cover of the new single.

"Hurdy Gurdy Man" (the song refers to a folkloric figure from ye olde rural England) hinted that the forthcoming Buttholes album might be the full flowering of the penchant for pastoralism displayed on Hairway. In fact, it's a grab bag, the Buttholes indulging all their disparate whims, and too often aiming to titillate rather than disorientate. On the plus side, "Barking Dogs" and "Blind Man" reprise the gastric/cosmic turbulence of "22 Going On 23" and "Jimmy", with guitarist Paul Leary scaling his usual Foustian heights. On the whole, though, there's far too much emphasis on pastiche. "No, I'm An Iron Man" pointlessly parodies The Jesus And Mary Chain, "Golden Showers" is southern fried boogie in the style of ZZ Top or Foghat ("A cool band, they were the model for Spinal Tap") and "Lonesome Bulldog (Parts 1-4)" spoofs, "The kind of MOR C&W you'd buy at a truckstop cassette stand, like Red Sovine."

Is there no form of cultural effluent that you can't wrest some amusement from?

"I do appreciate just about anything," admits Gibby. "I don't go as far as those people who have videotapes of their favourite TV commercials. I don't go looking for weird shit, but it seems like it comes for me. There's always stuff that never seems to cease to amaze and amuse. Like, for instance, I'm out in our front yard now, and I'm looking at where deer graze at night. In fact, I'm looking at a pile of deer droppings. And recently there's been these incidents where stray deer have been attacking people. It's the rutting season and they're kind of aggressive. Three building workers were attacked by some stags. Then there was a 65-year-old man who was collecting bottle tops from the roadside and a deer gored him. Another story I read in the local paper was about this dog that got hit by a car. His owners buried him. A couple of days later the dog dug himself out. He'd been in a coma. So the stories crop up continually. The lyrics are almost 100 per cent derived from this kind of material."

One beneficial result of the Buttholes' two year furlough is the long-awaited fruition of Gibby and bassist Jeff Pinkus' sideline project, The Jackofficers. The LP Digital Dump is a surprisingly convincing (but naturally thoroughly off-kilter) foray into dance music.

"It's Tex-house," explains Gibby. "It's kinda like Acid House if you'd never heard the music, but were inspired by the term. I'm not particularly into dance music. I useta be into disco when I was in high school, but I'm not up on the current dance scene. It's taking off over here. Every town has a couple of clubs full of kids with weird haircuts dancing to industrial music. But there's nothing like the UK's rave scene over here. It's a shame, I've always wanted to go to one of those huge dance parties out in the country. I guess it's shaping up as the Nineties version of psychedelia. But somehow I cant' see a weird social revolution basing itself around synthesiser music. The way I'd like to go is further into psychedelic atmospherics and ambience. I've been into space music for a long while."

"The album is basically a load of jacking off," continues Jeff. "The working method was to sit in my bedroom playing with samplers, and most of all, make sure I changed my weed as often as possible. If I smoke too much of one kind, I get immune to the effect. So we'd rig up the technology to get weird effects and then take it to the studio. There's no end to the games you can play with technology.

"Jackofficers is a pretty mindless project. It's kind of training in getting new effects. I'm not especially into dance music. I was really surprised at how easy it is to make a dance track. I call it 'bong-House' because I listen to it when I'm doing bong hits. Hold on a second, I just want to turn the video on - there's a documentary about his guy called Richard Speck who killed eight nurses."

Gibby and Jeff are speaking to me from the porch of the domicile they share with their two dogs. "It was the dog's birthday yesterday," adds Jeff, apropos of nothing. "We barbecued him some filet mignons."

How do the neighbours react to the strange goings on and aberrant sounds emanating chez Butthole?

"Well, the nearest neighbour is 10 acres away and, when I met him, the first thing he said was, 'Hi, I'm James, I'm into rebirthing and psycho-massage.' The other neighbours are these people who own a 1,000-acre ranch which they inherited from the guy who invented the coat-hanger. So we don't get too much trouble from the neighbours.

What kind of stuff have you been playing on the family stereo recently?

Gibby: "I'm listening to quite a lot of heavy metal these days. It seems like metal's got so fast, it's slowed down. If you play it at a low volume, it's like ambient music, like a chorus of buzz-saws."

Jeff: "I like MC 900 Ft Jesus and Eric B & Rakim. I like the heavy low-end bass. The low end is my thing, that's what I always look to aggravate in the Buttholes' sound. Who care about guitars, y'know? I'm always looking for new ways to make the low end more gruelling."

And what does the future hold in store?

"That's half the fun, siting around the family bong and spacin' out on ideas, and then forgetting them. Hey, man, I can see a big ole roadrunner in that cloud - it's bad-ass! We don't want to take Jackofficers party, with a huge sound system, and elephants and chickens and monkeys with skateboards. Shit like that. It would be real nice to have two bad-ass titty dancers from New England onstage with us!"